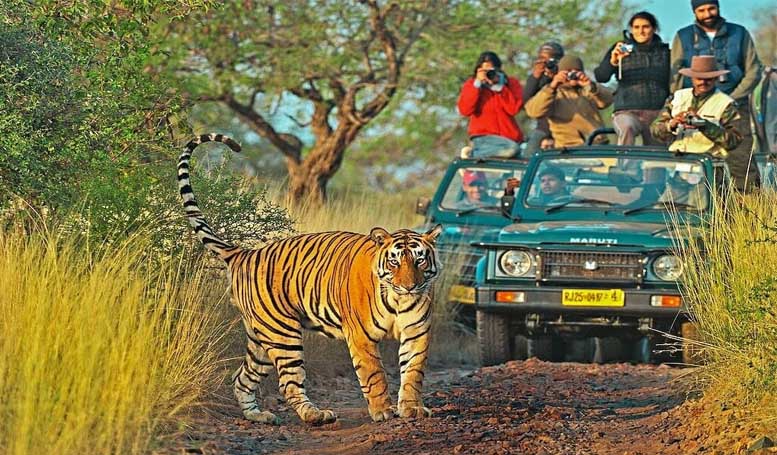 The history of Sawai Madhopur circles around the Ranthambore Fort. The settlement around the fort is the oldest here, though the origin of the fort is not exactly known it is believed to date back to the 8th century. The town founded in 1765 AD was named after its founder Sawai Madho Singh-I of Jaipur. Presently, Sawai Madhopur is known for Ranthambore, a Wildlife reserve and a place of historical importance. In Rajasthan, the Chauhan kingdoms of Sapadalaksa and Nodal dis-appeared; Govinda the grandson of Prithviraj Chauhan established himself at Ranthambhore and ruled as a feudatory of the Sultan of Delhi. Vagbhatta besieged the fort of Ranthambore after the death of Iltutmish and then from here he ruled for 12 Years by waging continuous battles against the Sultanate. Rana Kumbha captured the Ranthambore Fort in the middle of the 15th century. The fort was taken over by the rulers of Jaipur after the death of Aurangzeb.

Distance between Delhi and Ranthambore is around 394 km and the travel time taken to cover it is approximately 8 hours.

Places to see in Ranthambore

Ranthambore National Park
Spend some time amidst the lush green environment as you experience the exquisite flora and fauna. This national park is one of the most beautiful places in Sawai Madhopur that is listed as a part of Project Tiger and home to numerous Royal Bengal tigers.

This is the habitat of deer, nilgai, leopard cat, jungle cat, sloth bear, palm civet, Indian gazelle, and cobras, apart from tigers. It encompasses a huge lake called Padam Talao where the numerous birds are spotted around this water body that features a picturesque view of the lake. This is a perfect place for photography and for nature lovers to spend a peaceful hour in the lap of the surrounding. One can enjoy to fullest the beauty of flora and fauna and can have an exotic experience.

Ranthambore Fort
Indulge in the beauty of the rustic charm and the ruins associated with the Ranthambore Fort which are present with an intention of connecting with the rich history of Rajasthan. It’s considered to be one of the oldest forts in Rajasthan that was built in the 8th century by Chauhan dynasty whose main aim was to keep the enemies at a safe distance. It’s a UNESCO World Heritage Site.

The fort offers the wonderful picturesque view of the surrounding lakes. The Taran Dwar, a 32 pillared Chhatri, and Sameton ki Haveli are some of the most beautiful attractions of the fort that makes it more antique. Lord Ganesh Temple is the main attraction among tourists. It also gives a heart capturing the view of the Ranthambore National Park from the top of the fort.

Surwal Lake
The slow waves arising from the pristine lake of the Surwal Lake are here to fill up your senses with utmost relief and happiness. Surwal is a picturesque lake that is surrounded by meadows, farmlands, and villages. This lake is considered a heaven for nature lovers and bird watchers as it acts as the habitat for numerous migratory birds like spoonbills, sarus cranes, and greylag geese. It's having a mesmerizing effect that makes you spellbound in its lap. It also provides photogenic sunrise views which are having an enchanting effect on you.

Showcasing nature’s true splendour, you can have a surreal view during the sunset and sunrise while sitting on the exotic shores of this lake. Truly an admiration worthy site for every traveller, the picturesque views and the scenic sightings are definitely a sight to behold.

Shilpgram
Rajasthan is a hub that has always acted as a sheath to varied craftsmen who love to indulge in the architectural carvings of in India. Majority of these craftspeople have been known as the one belonging to Ranthambore. Thus, with an intention of showcasing their skills and true artistic talent, Shilpgram came into being.

Shilpgram is an ethnographic museum. It is established with an aim to empower craftspeople, especially women, to use their skills for the upliftment in terms of economy and culture. Shilpgram is a site that depicts the culture and heritage through art and crafts and needs to be appreciated. It provides tremendous diversity in the crafts, art, and culture that rejuvenates and paints the artistic and cultural picture of the country in the minds of the tourists.

Galta Mandir
Facilitating each and every visitor with a deeper insight into the mind-blowing divinity lying in Ranthambore, surely you are going to fall in love with the very famous Galta Mandir. The Galta temple is a historic Ram-Sita temple situated in the old city.

This temple is casually known as the Monkey Temple due to a large number of monkeys who live in the largely abandoned and only partially restored temples. These monkeys were featured in National Geographic Channel and in one episode of the Wildest India television series. The temple is known for its natural springs where the water accumulates in tanks (kunds). It’s very auspicious to have a bath in the water of Galtaji, especially on the day of Makar Sankranti. So thousands of tourists come here to have a bathe every year.

How to Reach Ranthambore

By Air : If you fly to Jaipur, you can hire a car and drive a couple of hours to Ranthambhore.


By Rail : Nearest railhead, Sawai Madhopur has good connections from the Delhi-Mumbai line.


By Bus : The drive from Jaipur via Tonk and Sawai Madhopur to Ranthambhore is 10 km longer than an alternative route via Kanota, Dausa and Lalsot, which is a bad road.

There are approximately 1.5 million people residing in Sawai Madhopur.

There is no facility of local buses in Ranthambore. In order to travel around the forests, the travellers can have an access to the cabs facility. However, for being a part of the Jungle Safari here, you shall have to travel in the vehicles duly approved by the Forest Department. Apart from that, the travellers can use four-wheeler jeeps, Mini canters or the Canters for spending some time in the Ranthambore forests.


Where to stay in Ranthambore