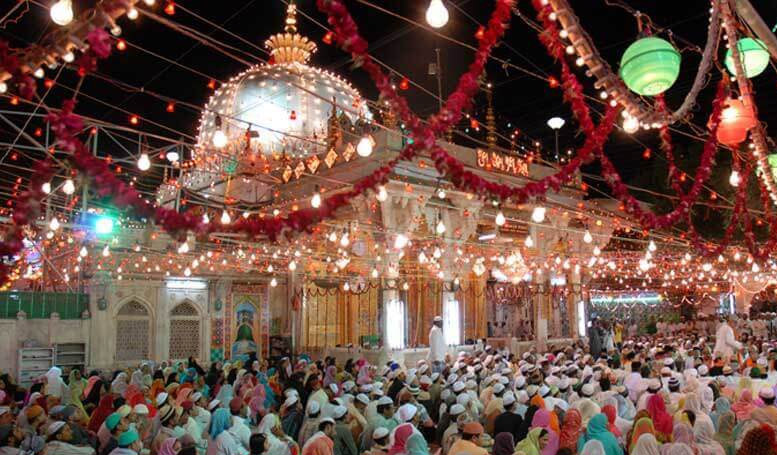 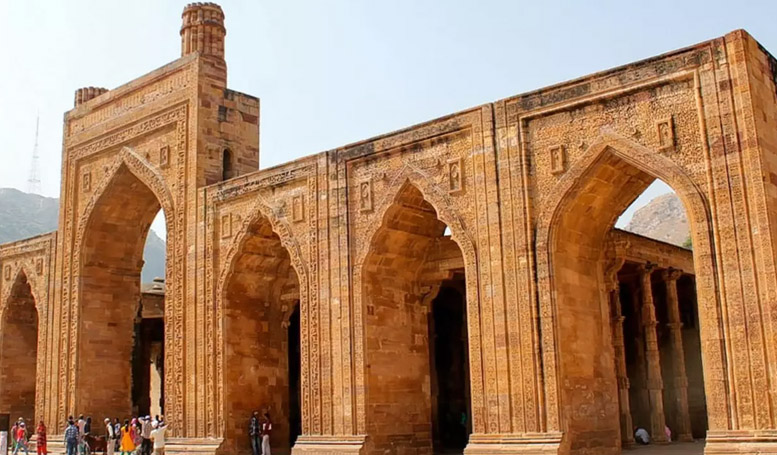 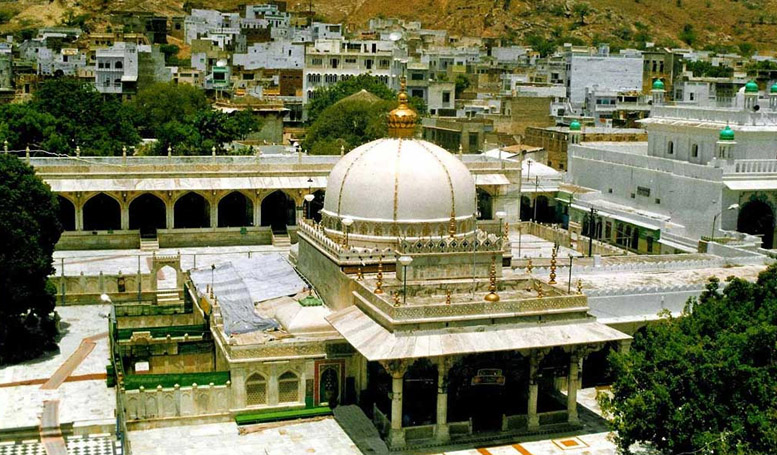 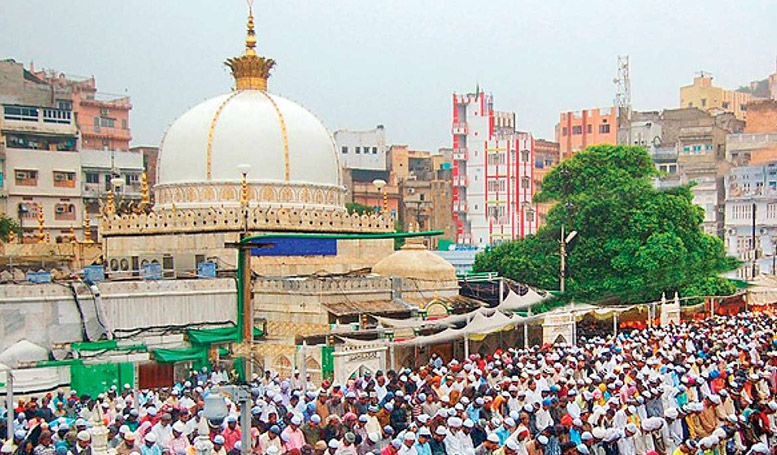 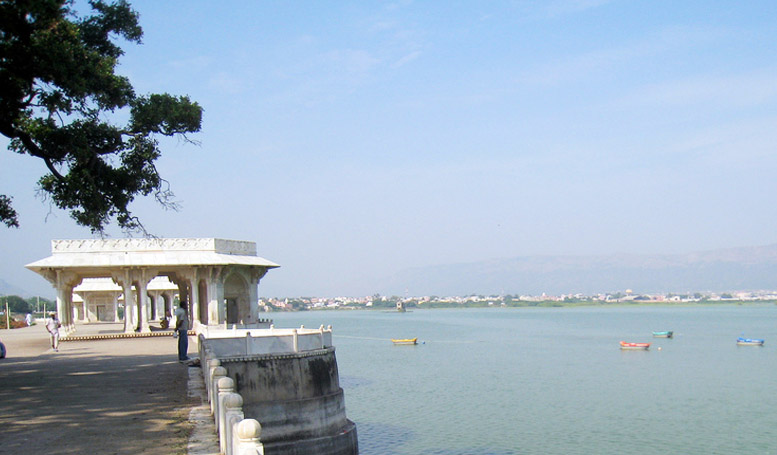 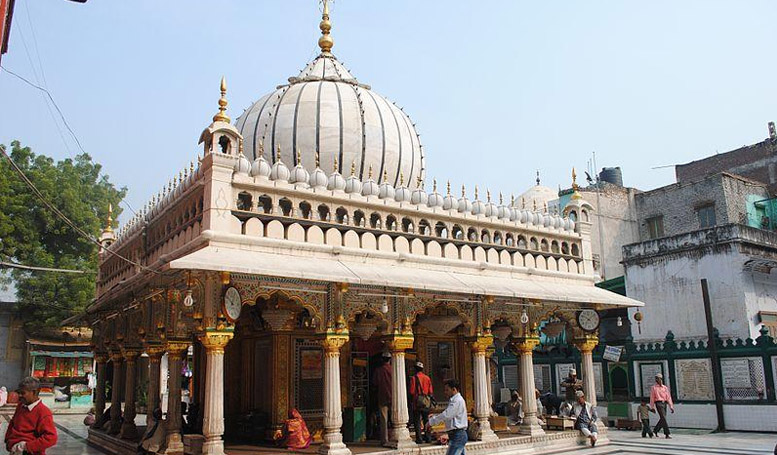 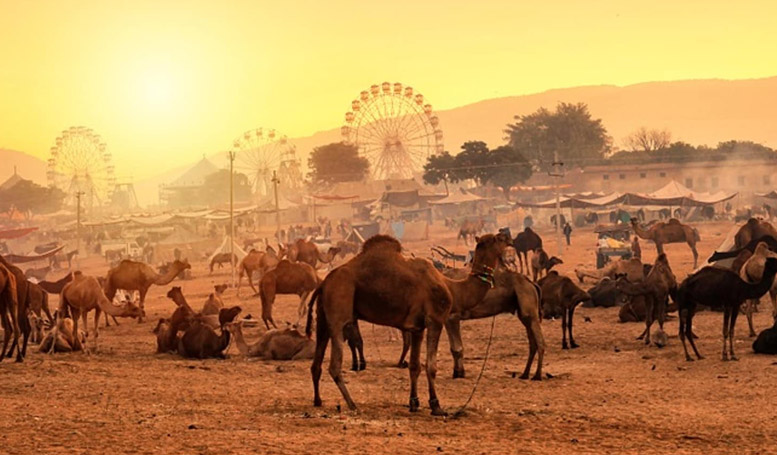 Deriving its name from “Ajay Meru” meaning the “invincible hill”, Ajmer is one of the most prominent tourist destinations in Rajasthan bounded by the Aravalli Hills. Given an identity and constructed by Raja Ajay Pal Chauhan during the 7th Century AD. This bustling city located about 14km from Pushkar and 130km from Jaipur’s southwest is flooded with tourists all throughout the year whether for the spiritual purpose or sightseeing. It is continually serving as a mixture of culture, divinity, history, ethnicity and community and thus, is able to gain a notable place in the heart of travellers. People belonging to Islam come from all across the world for paying homage to the Khwaja Moinuddin Hasan Chisti, depicted as the ultimate resting place of the direly followed Sufi Saint.

Ajmer is approximately 398 kms and it would take around 7 hours 30 minutes for the traveller to reach Ajmer.

Places to see in Ajmer

It comprises of elegantly formed 11 arches accompanied with a commendable Persian inscription showcased on the whole length of this building. As followed since ages, those people who are here to seek the blessings from the almighty Sufi Saint offer ‘Chadar’. How to forget the Qawwallli that is sung there every day full of vibrancy and power leaving every person touched by the positive aura and the charm present in it. The shrine has continually been indulged in the charity work and thus, it is often referred as the ‘Gharib Nawaz’ meaning supporter of the poor. The first ever person to visit this spiritual place was Muhammad Bin Tughluq in the year 1332.

Adhai Din Ka Jhonpda
Once a college and then a mosque- this is what describes the ‘Adhai Din Ka Jhonpda’. It is connected with a very unique as well as innovative tale. As told, Adhai Din ka Jhonpda was a Sanskrit college during its starting days and after some years, it was transformed into a mosque during 1198 AD. It was built in just a matter of two and a half days when the order for the same came from Mohammad Ghori.
Well, not solely its construction but its name also has a meaning. As the name goes ‘Adhai Din ka Jhonpda’, it means ‘shed of two and half day’. However, some others confirm that a fair having a tenure of two and a half days was held during Urs in the days of 18th century. Here the travellers are going to get awestruck with the splendid blend of Indo and Islamic architecture. Formerly, it is known as a relic that was given a shape with the help of some remains of the Hindu as well as the Jain temples.

Soniji Ki Nasiyan
Soniji Ki Nasiyan is also named as the Lal Mandir or the Ajmer Temple and is located in Ajmer’s Prithvi Raj Marg. It is an apt exhibition of the intrinsic architecture with everything decked up in golden colour adding on to the vibrancy of this hub.  The site is located quite near to the Akbar Fort and the visitors are surely going to get speechless on seeing the beauty present here. The purpose of setting up this temple was none other than the worshipping of the first Jain Tirthankara Lord Rishabhdeva.
Here, the visitors will get to see the most beautiful demonstration of the five stages that Lord Adinath passed through during his life (Panch Kalyanak). These prominent stages are named as Garbha Kalyanak (Conception), Keval Jnan Kalyanak (Omniscience), Janma Kalyanak (Birth), Tap Kalyanak (Renunciation), and Moksha Kalyanak. This is not a normal one since they are covered up with the Gold leaf from all around. The precious stones, silver as well as golden work are truly a heartthrob and surely you are going to fall in love with it!

How to Reach Ajmer

By Air : The Sanganer Airport situated at Jaipur, which is almost 132 km from Ajmer, is the closest to the city and is directly linked to the metro cities of Mumbai and Delhi


By Rail : Ajmer Junction Railway Station lies on the Delhi-Mumbai railway line and is directly linked with various towns in India


By Bus : Ajmer has an extensive system of broad roads directly linking it to Delhi and all the main towns of Rajasthan including Jaipur, Udaipur, Jodhpur, Jaisalmer and Bharatpur. There are any tourist Volvo bus operators that you can get in many parts of the towns except the state government transport buses.

Winters in Ajmer are quite cooler with the average temperature ranging below 5 °C majority of the time. Due to its location at Thar Desert’s edge, Ajmer experiences hot summers with the average temperature recorded as 30°C-40°C and sometimes it may also rise up to 42°C. Monsoons hit Ajmer during mid-June and the temperature at this time prevails between 26°C to 34°C. The travellers are surely going to have a fun-filled time while experiencing the rains of Ajmer.

In order to commute to the places near this city or within, travellers can enjoy the facility of taxis as well as the auto-rickshaws.

While being there, the tourists will be having some sights of the tongawallahs making their way from the busy streets. They are meant to take the travellers to a whole tour through the Ajmer city.

In order to get an instant pick up facility, you can use the Old and Uber Cabs’ services which will be there at your location as soon as you book them.
Rent a vehicle from the local agents in Ajmer and roam in Ajmer in your own way!


Where to stay in Ajmer

Ajmer is a city experiencing a good availability of accommodation facilities for the budgeted as well as a luxurious traveller. Whether you are expecting the modern amenities or the traditional way of living, Ajmer has it all! However, the most common thing that you will be attaining during your stay here would be none other than ‘serenity and the utmost comfort’.

The hotels of Ajmer range in terms of budget as well as the facilities offered. Here, you can get standard, modern and pretty luxurious accommodations. Choose out from abundant staying options available and relax the way you want!