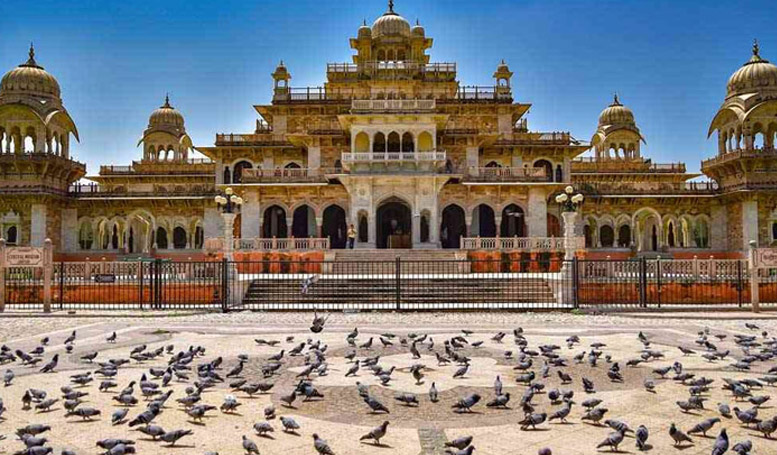 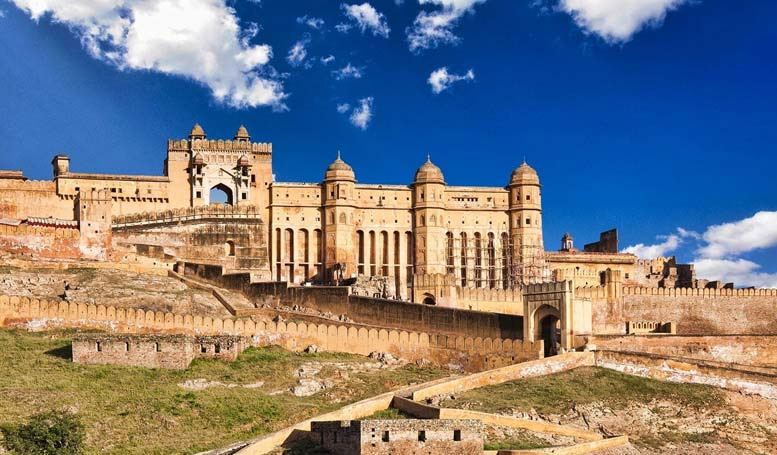 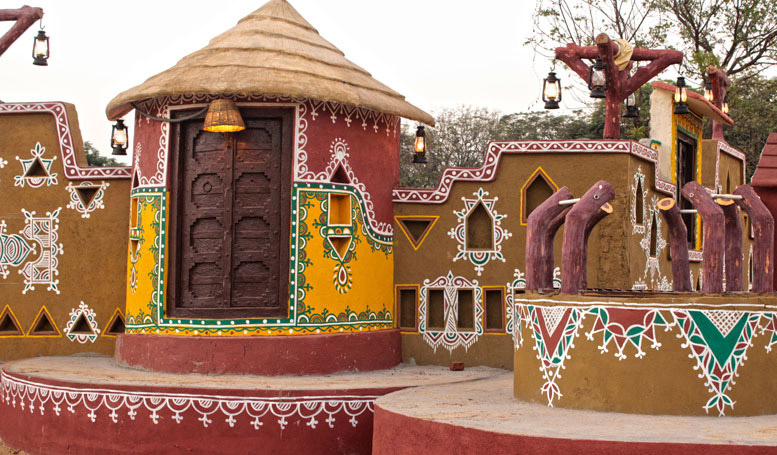 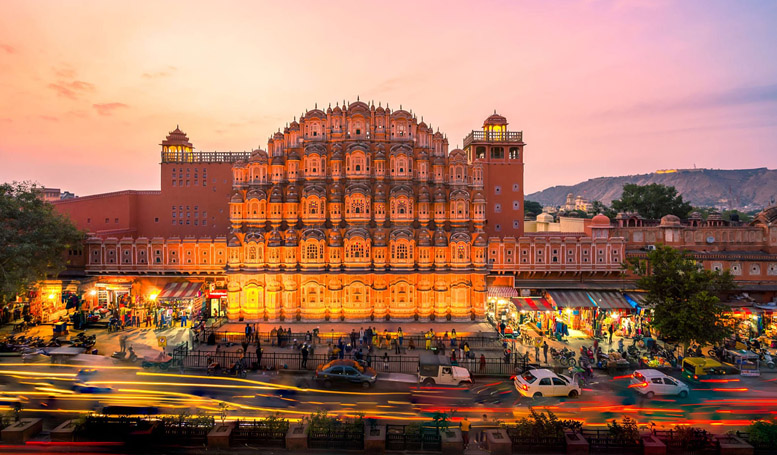 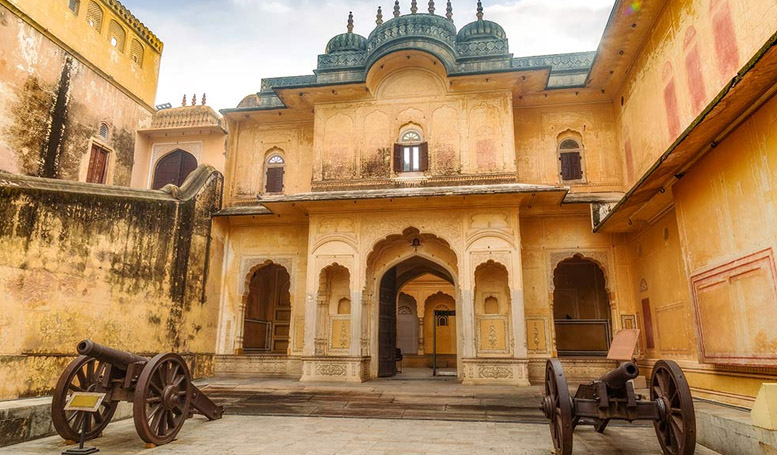 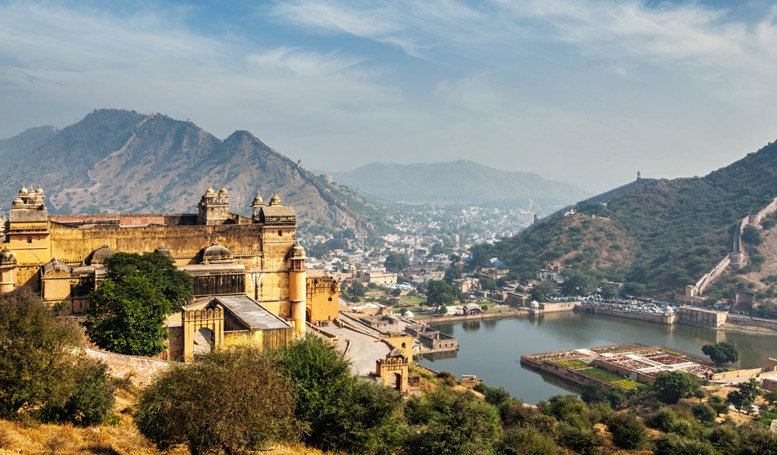 With the old city surrounded by walls and gates decorated with drawings on the backdrop of a beautiful pink hue, Jaipur, the pink city successfully manages to retain its old world charm. The Pink City is wholly a beautiful combination of a good number of forts, palaces, museums as well as temples. Jaipur is filled to the brim with bustling local bazaars where you can shop for local handicrafts and trinkets to your heart's content. Popular bazaars in the city include Bapu Bazaar, Tripolia Bazaar and Johri Bazaar. Its local Rajasthani cuisines serving the hunger of every person here include the scrumptious Ghewar, Dal Baati Churma and the very famous Pyaaz Kachori.

Jaipur is around 5.5 hours away from the capital city and the distance between these two is approximately 281 kms.

Places to see in Jaipur

City Palace
One of the most remarkable touristic hub in the Pink City is the City Palace that shows a great combination of Rajputana architecture as well as the Mughal and European styles. It undoubtedly pictures the royal history of Jaipur in a very antique manner. Constructed during the tenure of 1729 and 1732, this timeless construction has always presented the richness of Jaipur with utmost interest.

This majestic building comprises of a huge complex and other distinct gardens, gateways, holy shrines as well as the palaces and it is presently considered as the home to a royal family. The exterior walls of this building have been highly focused and thus, they have successfully been the best presentation of Jaipur’s heritage. Out of the abundant gateways available, the public can have an access to the Virendra Pol & Udai Pol, however the Tripoia Pol is accessible solely by the members of the royal family residing in it.

Jantar Mantar
Jaipur is not just a place for the majestic forts and palaces, instead it is also a place for one of the most prominent observatories out of the five which are already present in other areas of India. Jaipur’s Jantar Mantar is the largest of all and also has always been preserved at its best. The other four observatories are spotted in the capital city, Mathura, Varanasi and Ujjain.

This massive setup was established by Sawai Jai Singh II who was always known for his deep astronomical skills. He was quite interested in its construction and thus, each and every element in this observatory has been composed with high attention. It contains 16 instruments whose shape looked like some huge sculptural composition and this place not only had a significance during the ancient days. Instead, it is till now in use by some for taking out the arrival time and the weather conditions during the varied seasons here.

Hawa Mahal
Surely, one of the most picturesque sites in Jaipur, Hawa Mahal has been in every traveller’s bucket list who is intending to visit the pink city. The monument was built during the year 1799 and has been beautifully constructed with an intention of making it a palace perfect for summers.

As the name goes, Hawa Mahal with ‘Hawa’ meaning breeze and ‘Mahal’ meaning palace, it is the Palace of Breeze that allows the cool air to pass through it and thus, it acts as an apt place for getting rid of the scorching heat and hot winds during the summertime. Its 953 windows on the outside walls as well as a greatly unique physical appearance is literally a heartthrob. The palace was constructed with an intention of acting as an extension to the gigantic City Palace that is situated very close to the Hawa Mahal.

Amber Fort
The Amber fort was not a fort palace since its establishment, instead it was known as the Kacchwaha citadel until the year 1727. Lastly, when the capital ultimately moved to the pink city it started being considered as the Amber Fort. During the time, when Amber was known as Jaipur’s capital this fort was the home of the rulers belonging to the Rajputs.

Amber Fort is made up of marble and sandstone and is an amalgamation of four courtyards, gardens and spacious halls. On entering this huge fort, you will be having a sight of the Jaleb Chowk that is a primary courtyard where the parading of soldiers was done. On the right hand side is the Shila Devi temple that has been famous for the sacrifices made by many people whose heads were offered to the goddess. Reaching this fort is also an ultimate experience since in order to enter the fort, the visitor can ride on an elephant back or get there by jeep or golf-cart.

Jaigarh Fort
The Jaigarh Fort is situated on the top of the Hill of Eagles and was established in the year 1726 AD by the majorly renowned Sawan Jai Singh II. Tucked at an elevation of 500 feet above sea level and the picturesque panoramic scenes that it has to offer are quite beautiful. It is a home to the ‘Jaivana Cannon’ that is recognized as the world’s largest cannon.

The travellers are not solely going to see the Jaigarh Fort instead they are also going to explore the other attractions which are present within Jaigarh’s vicinity such as the Vilas Mandir, Laxmi Vilas, Lalit Mandir and the Aram Mandir. The structure is built up with the help of sandstones and has been extended across a highly wide area of about 3 kms. This Victory fort has also acted as a place where all the weapons, amours, arms and the cannons were wisely stored.

Nahargarh Fort
On thinking about Rajasthan, the first thing that comes to your mind would be none other than its majestic palaces and forts. The Nahargarh fort is one of those majestic setups. Located in the majorly known Aravalli mountain ranges, this massive establishment is filled up with magnificence and fascination.

The fort was built during 1734 and during its start it was referred as Sudarshangarh. However, later on it came into identity as the Nahargarh Fort. Maharaj Sawai Jai Singh II built this gigantic fort so that it can play the role of a very strong defence for the pink city. The name means ‘abode of hills’ because of the varied tigers roaming around the mighty hills. But, this is not the sole reason behind the name. Some utter that the fort has been named after the very famous Prince Nahar Singh Bhomia.

Birla Mandir
Filled up with immense purity and high serenity is the exquisite Birla Temple. This spiritual hub ensures the best peace of mind that a person can ever attain. There are a total of seven Birla Temples located all across India and Jaipur acts a home to one of them. This Hindu temple is quite grand and is tucked at an elevated surface of Moti Dungari hill’s base.

Originally, this divine hub is named as the Laxmi Narayan Temple by majority of the pilgrims. This is not a simple temple, because it is also a showcase of the beautiful architectural work of the pink city. Built up with white marble, the construction of this temple has been focused on giving it a modern approach rather than the traditional Hindu temple’s look. Inside the temple are the sculpted idols of almighty Lord Vishnu, Lord Laxmi along with other statues.

How to Reach Jaipur

By Air : The closest airport is Udaipur which is about 90 km from the city and connected with New Delhi, Jaipur, Jodhpur, Ahmedabad, etc. by regular flights.


By Rail : The railway station is an intersection of Western Indian Railways and is connected with Ahmedabad, Ajmer, Udaipur, Jaipur, etc.


By Bus : The city is directly well linked with all parts of India, with the Golden Quadrilateral Road Project and North-South-East-West Corridor Expressway passing across it. The public bus stop is situated in the mid of old and new city and good efficient facilities are accessible for Delhi, Mumbai, Ahmedabad, Ajmer and other key big towns.

Jaipur’s weather has been inspired from the deserts and thus, it experiences desert like hot and dry climatic conditions throughout the year. The temperature during the summertime goes above 40 degrees Celsius and the summer months here start from April and end by June. Monsoons bring a sort of relief to the weather during the months of July and August. Wintertime here extends from November till March with the temperature witnessed at around 25 degrees Celsius. The days during winters are pleasant but the nights get quite chilly and the temperature goes till 5 degrees Celsius.

At the Jaipur airport, you are going to spot a prepaid taxi counter. At the railway station, there is also a facility of prepaid auto rickshaw counter.

For indulging in a half day or full day sightseeing tour in Jaipur, one can also try out the app-based cab services such as Uber and Ola.

V Care Tours is also a reliable company for hiring a car and driver in Jaipur and Rajasthan.

Alternatively, take a Pink Auto Rickshaw (driven by women from poor households) or ride a Segway to go sightseeing.

Auto rickshaws are plentiful in Jaipur but they rarely agree to go by the meter. So, be prepared to haggle to get a decent price.


Where to stay in Jaipur

In Jaipur, there are a good number of outstanding accommodations for every kind of traveller. Whether it is a budgeted stay or a stay in the luxurious authentic Palace or even a hostel for the backpackers- Jaipur has it all! For being closer to the Jaipur’s railway station as well as the old city, nothing can beat the perfect location of the splendid Bani Park as well as the Hathroi Fort.

Just in case, you are intending to stay here for a month or even more, then you can rely on the Om Niwas located in the Bani Park for the proficient hospitality services.