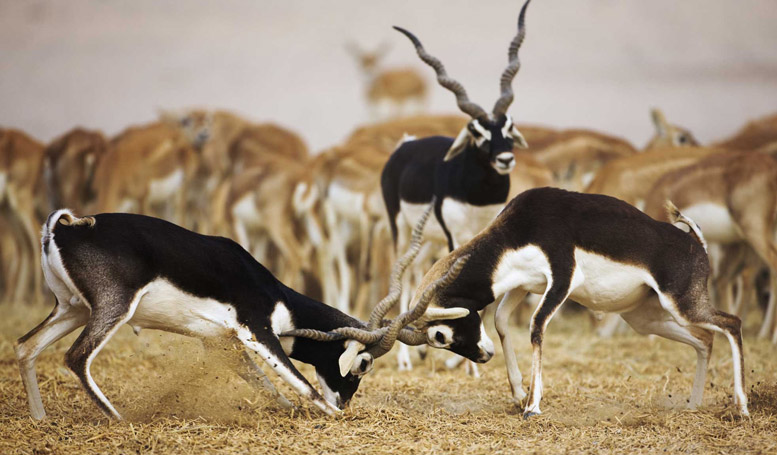 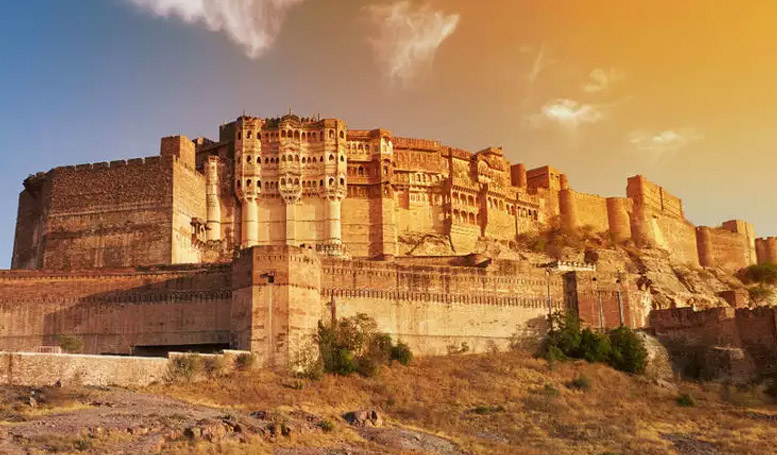 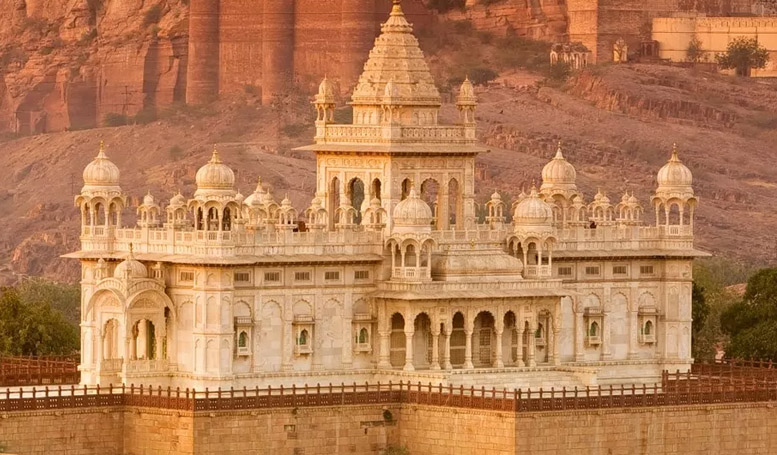 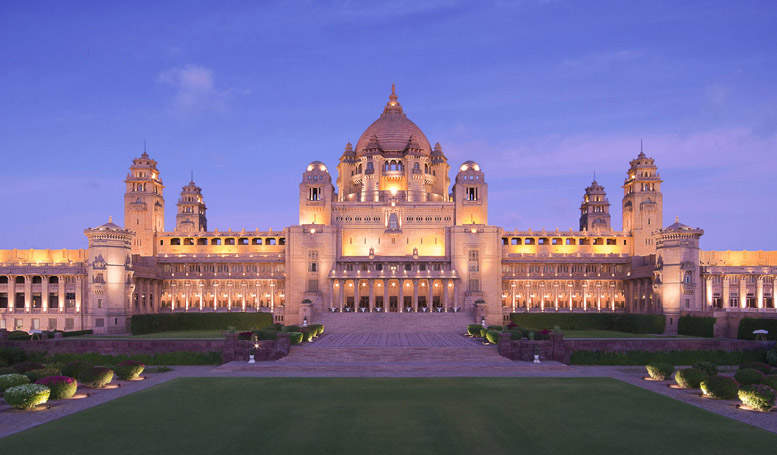 Jodhpur is the dream of every traveller and it is surely a place that each and every tourist would be intending to visit while being on a journey to India. This enchanting city is so massive that it has been listed as the second largest and the metropolitan city in Rajasthan. This Gateway to Thar has a beauty beyond words! It hails from a historic past and was founded by Rao Jodha who was the Rajput chieftan of the Rathores. With its gigantic Mehrangarh fort overlooking this blue city, it looks no less than a masterpiece from up above. The eating joints, forever smiling faces of the locales, vibrant culture, blue houses and the serene lakes- everything is so perfect in Jodhpur!

The distance between Jodhpur and the capital city is around 605 kms and the time taken to travel is approximately 11 hours.

Places to see in Jodhpur

Mehrangarh Fort
Truly, the Mehrangarh Fort is a place that is filled up with abundant magnificence. Whether we mention about its size, the serenity lying there, its diverse history or the picturesque view of the city from there; each and every moment is such a beauty. This marvellous fort includes a demonstration of the commendable architecture and a plethora of magical charm in it.

Constructed by Rao Jodha during the year 1459, this charismatic setup is extended across an area of 5km and is spotted up above a 125m high hill. The Mehrangarh fort is an amalgamation of seven gates created by different rulers. While being present here, the amazing view of the blue city will resemble like a blue carpet laid in the front of the hill. The formation of this fort has the ultimate efforts of different rulers and thus, it holds a special prominence.

Umaid Bhawan Palace
Definitely a hit in the attractions’ list of Rajasthan, the luxurious Umaid Bhawan Palace in Jodhpur is going to leave you awestruck with its royal aura. Named after the king Maharaja Umed Singh, the palace has always showed brilliant architecture and the most perfect mixture of Victorian as well as the Rajput style.

The palace is presently used as a heritage property where the luxurious travellers stay and spend their time amidst the peaceful surroundings and the king-sized life here. It is owned by the grandson of king Maharaja Umed Singh. It has been re-constructed during 1944 with an intention of providing employment opportunities to the unemployed people especially in Rajasthan. Apart from that, there is also a museum in the vicinity of this palace that is open to public but not accessible during Sundays. It has a collection of China vases, arms and the furniture.

Jaswant Thada
Jaswant Thada is a cenotaph constructed in a royal manner and is situated on the left-hand side of the Mehrangarh Fort complex. It has been constructed with an intention of being a commemoration site for Jodhpur’s 33rd Rathore ruler i.e. Maharaja Jaswant Singh by his son Maharaja Sardar Singh.

Inside the cenotaph are two more huge tombs and located quite near to the cenotaph are three more cenotaphs which together give a splendid look to this tourist hub!  For anyone who is striving to have a look at the architectural brilliance in India shall ultimately head towards Jaswant Thada. The whole monument has been built up with white marble and the walls have been intricately carved out of the marble sheets. Apart from that, you are going to get highly impressed with the Jali work that has been done on the cenotaph. This temple like structure is regarded as the ‘must visit’ hub in Rajasthan.

Kaylana Lake
Never imagined that even a man-made lake would give a refreshment just like a natural one! Situated approximately 8 kms away from the Jodhpur city’s west, the Kaylana Lake is a man-made lake created by very famous Pratap Singh during the bygone era in the year 1872. This massively extended lake has been expanded across a distance of 84 sq. kms with a notable depth of 35-50 feet.

Being at the Kaylana Lake is going to prove as a perfect treat for the wildlife enthusiasts and specially those who are a dire lover of the bird species. The tourists can have abundant sights of the Siberian cranes which stay nearby the lake especially during the winter months. This water body is not solely a place meant for the touring purpose, but also it is considered to be the only water source of Jodhpur and its neighbouring cities. While being on your journey to Jaisalmer, this lake acts as the best relaxing stopover for the travellers.

How to Reach Jodhpur

By Air : You can take one of the regular and direct flights from the major cities in an around Rajasthan and the metros in India. The well connected airport is located 5 km from the city center, in the cantonment area.


By Rail : You can easily take a direct train from the major cities in India like Delhi, Mumbai, Jaipur, Chennai, Kolkata etc. Besides, "the Palace on Wheels" also visits the city. The Railway Station is located on the station road and comes under the Northern Railway Network of India.


By Bus : You can conveniently take a bus or hire a cab. The main highway between Jodhpur and Jaisalmer is via Agoli and Pokaran and is well connected with Agra, Ahmadabad, Ajmer, Delhi, Jaipur, Jaisalmer and Udaipur. You can reach Jodhpur from Delhi via Gurgaon, Jaipur, Ajmer, Barmer and Pali.

There are approximately 1.5 million people living in Jodhpur.

Jodhpur experiences extreme climatic conditions and due to this, the variations in the temperature remain quite high here. Here, the weather is in accordance with the typical desert conditions and thus, it is considered to be dry and hot majority of the time. During the summertime, the temperature here is recorded at around 37-42 degrees Celsius. On the other hand, winters are around 15-28 degrees Celsius. However, this place is sunny all throughout the year. The climatic conditions in Jodhpur are the best between October and March.

Jodhpur is a city with some good facilities of local transportation due to being well-developed. Buses move from one place to another regularly in Jodhpur and thus, majority of the tourists as well as the locales are dependent on these buses for their travel.

Also, the autorickshaws serve as one of the most preferred modes of transportation in Jodhpur and also, they are easily accessible.

For getting the instant cab facility, the tourists can book their Uber as well as Ola cabs with the help of an ‘easy to use’ application.

In order to tour in and around the beautiful city of Jodhpur, rental vehicles’ facility is also available.

Where to stay in Jodhpur

Jodhpur is a ravishing city and being here is surely a very memorable vacation time any person can get! There are distinct kinds of accommodations here and literally, the amenities provided there are the ones which would be truly satisfactory for every traveller. Ranging from the 1-star properties to the 5 stars hotel, the stays here are ultimately a delightful experience.

Apart from that, tourists can also opt to stay in the luxurious resorts accompanied with the rejuvenating spas and massages taking you away from the pressure that was filled up in your mind from your monotonous schedule. Also, spending your time in the massive architectural Heritage havelis is a ‘must try’ here.