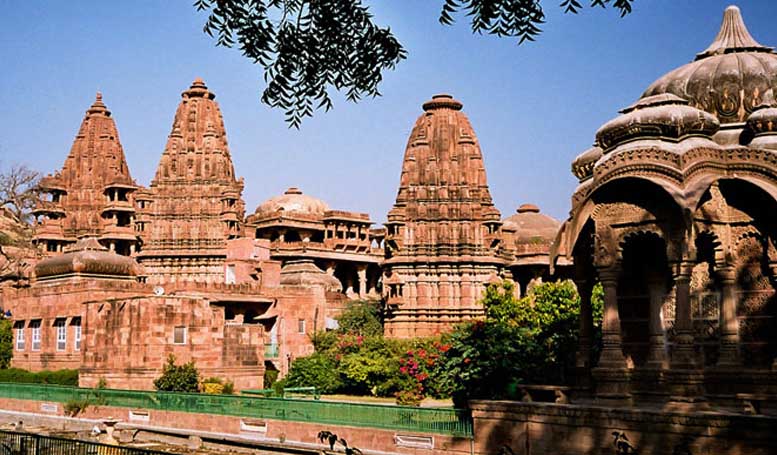 Renowned for its primeval attractions, Mandore is a tiny town in Rajasthan that is always considered to be one of the most favoured destinations in the Land of Warriors. Mandore is a very significant hub carrying a mythological fact along with it, and as entailed it has been notified that it is the marriage place of demon king Ravana. It has turned out to be one of the indispensable reasons for such a finest fame of this destination. During the bygone time, Mandore played a role of Marwar’s capital, however this identity was later shifted along with the shifting of rulers to Mehrangarh. There are plenty of things whose presence you can expect within Mandore, these would include its ravishing gardens having a scenic landscape as well as the gigantic cenotaphs belonging to the erstwhile rulers of Jodhpur. Its highly attractive laid out gardens and the sprawling greenery have always left the visitors speechless with the abundant beauty.

The distance between Mandore and Delhi is approximately 569 kms and the travel time taken for the same will be at around 11 hours.

Places to see in Mandore

Mandore Garden
The most preserved site in Mandore blessed with the happy surroundings filled up with huge serenity is the ravishing Mandore Garden. Standing strong with an intention of telling the stories relating to the ancient era, this scenic destination is quite magnificent. On hearing its name, the sole image that is made in your mind would surely belong to a lush green garden with some flowers and grass but that’s not the case with the exquisite Mandore Garden.

Here, the visitors will be grabbing an opportunity to gather some unbelievable insights from the dewals or cenotaphs from the former rulers of Jodhpur. Don’t expect them to have an umbrella shape just like the other cenotaphs present in Rajasthan, instead they are having a shape that is built in accordance with the lines of the Hindu Temple. These are made up of the red sandstone and have an elevation up to four stories.


How to Reach Mandore

By Air : Mandore can be reached by air by flying to Jodhpur which is the closest airport. Located only 9kms away from Mandore, Jodhpur is well connected with major metro cities of the country such as Delhi and Mumbai making it easily accessible to Mandore.


By Rail : The closest railway station to Mandore is Jodhpur which has trains operating from major cities.


By Bus : Mandore is accessible by road from Jodhpur, Udaipur, Jaisalmer and all other major tourist attractions of Rajasthan

There are approximately 1000 people living in Mandore.

Mandore experiences chilly winters, hot summers and seasonal rainfall. The summers here commence quite early i.e. around March and end by June with an average temperature of 36-42 degrees Celsius. Whereas, the wintertime experiences pleasant days but cooler nights having an average temperature of 10-24 degrees Celsius. Rains in Mandore are held during July, August and September giving some relief to the heating temperature but experiencing an increase in humidity.

The travellers who are intending to travel in Mandore shall have to keep in mind that there is no prevalent local transportation available here. Thus, they must indulge in this region’s sightseeing tour in their own vehicle.


Where to stay in Mandore

There are a good number of hotels/guesthouses and other luxurious stays available in Mandore and thus, the travellers can count on this region for having a serenity filled and also a satisfactory stay.