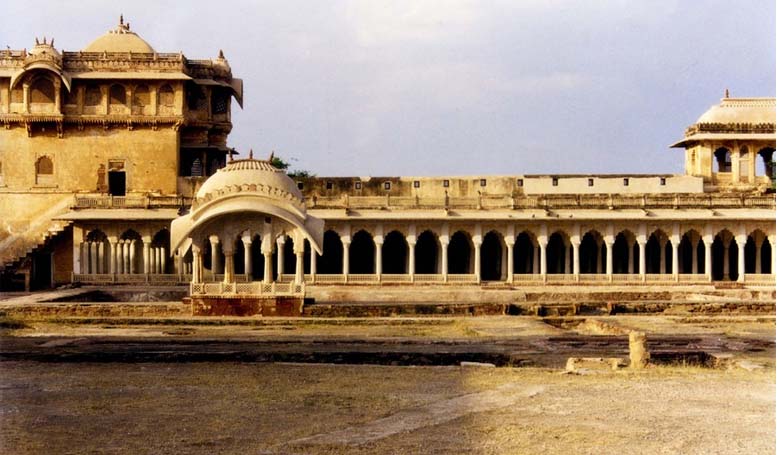 A totally charming place sandwiched between the two majorly recognized towns of Bikaner and Jodhpur, Nagaur has always maintained a special place in the hearts of visitors who have explored its gems. Filled up with the red chilly markets which you can take back home as soon as your journey ends here and add it to the delectable taste of your cuisines, no one can ever get over from the abundant fun that the visitor is going to gather from here. Apart from that, the travellers can also engage in the enjoyable and very vibrant cattle fair held every year with utmost zeal and enthusiasm. The creation of this aged city was done back during the years belonging to the 12th century and it was done by the Naga Kshatriyas.

The distance between Delhi and Nagaur is around 489.5 kms and the time taken to cover it would be approximately 8 hours.

Places to see in Nagaur

Nagaur Fort
For those intending to have some glimpses of the monuments which had a role in the wars during the bygone era, can definitely head towards the Nagaur Fort. This fort has been acting as a great illustration of the wars that were held amongst the rulers during the earlier centuries. The establishment of the Nagaur Fort was facilitated during the 4th century by the majorly known Nagavanshis and after some consecutive centuries, the whole setup was re-established by Ghaznivities during the years belonging to the 12th century.

The fort has been continually playing the role of a sheath housing a good number of palaces as well as the monuments which were no less than a reminiscence about Nagaur’s history and other relatable information. Not only is its external appearance heart stealing, but also its interiors having abundant Mahals as well as the fascination filled ornamental work. It consists of many palaces with the most important ones out of them being the Abha Mahal, Deepak Mahal as well as the Akbar Mahal.

The Glass work is a showcase of the old age skills of varied artists who were indulged in the maintenance of this spiritual hub. Not only this, the marble art work done in the premises of this temple are way too phenomenal and surely on seeing it, you would definitely not be able to take your eyes off since it is literally a sight to behold. This highly explored destination, includes the presence of Jain Lord Mahavira’s idols along with the idols of other 23 Jain Tirthankaras who are always attended by innumerable pilgrims and visitors with an intention of seeking their blessings.

How to Reach Nagaur

By Air : Nearest airport, Jodhpur is connected by daily flights to Delhi, Mumbai, Jaipur and Udaipur


By Rail : Nagaur Station is well-connected to Jaipur by the Jaipur-Bikaner Intercity Express and to Kolkata by the Howrah-Jaipur Express.


By Bus : There are three ways to get here – from Jaipur via Sikar or via Ajmer, or from Jodhpur, as the town is within easy reach of the three Golden Triangle desert cities.

There are approximately 4 million people living in Nagaur.

There are extreme weather conditions present in Nagaur and thus, this city experiences very hot summers and chilly winters. The temperature during summer months, stays at around 35-42 degrees Celsius whereas during the wintertime, the temperature is approximately 15-25 degrees Celsius. However, the sun shines brightly all throughout the year.

There are no local transportation facilities available in Nagaur and thus, you’ll have to explore the destination on your own. You can travel in your own vehicle during Nagaur’s sightseeing.


Where to stay in Nagaur

The best accommodation facility available in Nagaur is the Nagaur Fort. Apart from that, there are no other hotels/resorts present in this city.