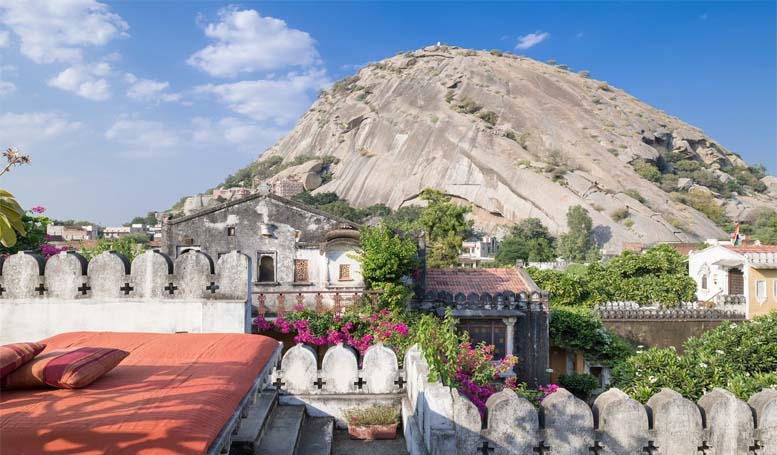 Accompanied with a potential to create abundant memories for the lifetime for each and every tourist visiting here, Narlai is a ravishing destination. This rustic region is a serenity filled village that is tucked in Rajasthan’s Pali District. It is spotted at a distance of approximately 36 kilometres from the very famous city Ranakpur. Such a prominent destination is undoubtedly worthy of innumerable glimpses and not merely meant for just passing through. Definitely a place that no one would have ever witnessed in the other regions of Rajasthan, Narlai is truly a heavenly site hailing from the desolate desert sands. There are a number of sights in this city, however the exploration of this centre can be done within a single day. But, still there are plenty of tourists who spend more than one day here with an intention of staying away from the hustle and bustle of their cities and spend some time amidst peace.

The distance between Narlai and Delhi is at around 604 kms and the travel time to cover the same is approximately 10.5 hours.

Places to see in Narlai

Ranakpur Jain Temple
An exquisite place not only for the spiritual people, but also for the history freaks as well as the architecture lovers. No doubt on its beauty, the intricated murals and the carvings done on its internal and external walls are surely going to take you back to the ancient days of its establishment.

A deeper insight into the admirable skills and artwork done in the Ranakpur Jain Temple by the architects during that time are literally worthy of a handful of praises. Spotted at a distance of about 32 kms from the beautiful village of Narlai, you can never ever leave this place unvisited while being present in Narlai. Majority of the people identify the Ranakpur Jain temple from its structural designs and the way it has been constructed during the 15th century by none other than Seth Dharna Shah.

Cave Temple
Continually proving to be a very antique experience for every visitor here, the Cave Temple is stealing thousands of hearts with its incomparable characteristics. Till now, the city of Rajasthan has been taking you to the spiritual hubs which were located out in the open and had a participation of the architectural designs done on their walls and ceilings but the same is not the case with the Cave Temple.

The Cave temple is situated inside the Narlai hill and in order to have an access to this divinity filled centre, the visitors need to climb 100 steps. It is dedicated to Lord Shiva and its auspiciousness is at such a height that even the visitors from abroad have already added this place to their bucket list. A best place for the adventure seekers too, they have to climb up 100 steps and your hardwork will finally lead to this heavenly place. As believed, the cave temple also once served as the meditating centre of Indian Sage Shri Narad in order to seek some blessings from Lord Shiva and please him too.

Rawla Narlai Fort
Starting its identity as a fort symbolising the bravery and valour of the warriors and now present in a ‘Heritage Resort Avatar’, the Rawla Narlai Fort has come a long way! Situated in the desert countryside, this heritage property has left no chance to stun its visitors. For those who are striving to attain some blissful tranquillity should surely know that the doors of Rawla Narlai Fort are truly opened for them.

This heart stealing destination is located at an equivalent distance between both the wonderful cities of Jodhpur as well as Udaipur. It means that the travel time to reach this heritage property from both these cities takes around 2 hours. The destination is the most perfect for rejuvenating your senses and relaxing a bit as you give a halt at such a charming hub while experiencing the rural charm associated with the beautiful state of Rajasthan.

How to Reach Narlai

By Air : Nearest airports are Udaipur and Jodhpur


By Rail : Falna is the nearest railhead while Udaipur and Jodhpur are convenient railway junctions


By Bus : From Udaipur it will take 3 hrs to get to Narlai because it's a single carriageway

There are around 7000 people living in Narlai.

The city of Narlai is accompanied with a dry and very hot climate. The summer months commence quite early i.e. from April and concludes by June. Days during the summertime are very hot making it unfavourable to be visited during the summers. The average temperature reaches up to 45-46 degrees Celsius. On the other hand, wintertime prevails right from October with the days being pleasant and nights being chilly. During winters, the temperature reaches to around 4 degrees Celsius during the wintertime. The city experiences adequate rainfall that prevails in the month of July.

Travelling within Narlai and its sightseeing can be done in your vehicle because, there is no prevalent local transportation facilities there. Also, the accommodation that you are staying in shall also arrange the transportation for you.


Where to stay in Narlai

The sole accommodation facility that is available in Narlai for the travellers to stay in is none other than the Rawla Narlai Heritage Hotel. Giving you abundant luxury and serenity at the same place, this heritage property is simply the best.