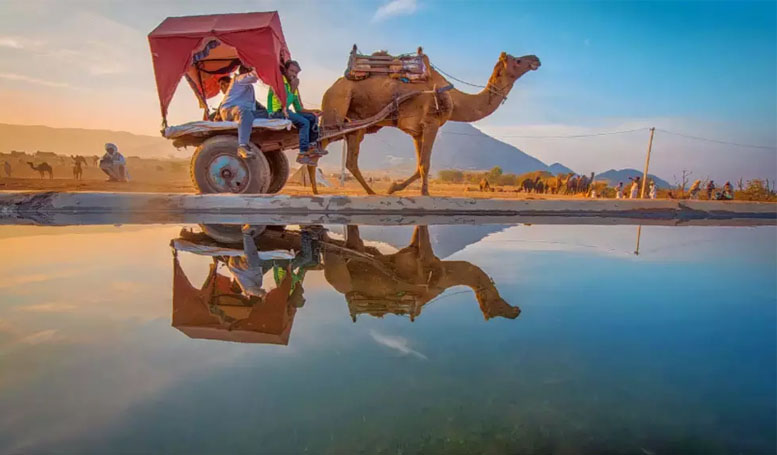 Vibrant city Pushkar is situated in the state of Rajasthan, attracting lot of tourists every year. Pushkar is famous for its “LORD BRAMHA TEMPLE” which is one of the very few existing temple dedicated to the lord of creation. Origin of river Luni, Pushkar is bordering Thar desert. Pushkar is set on the PUSHKAR LAKE with 52 Ghats and hundreds of temples. It is also looked upon by a good number of travelers for its “PUSHKAR MELA” also known as “PUSHKAR CAMEL FAIR”. This fair happens every year in the month of November at the time of kartik Poornima (full moon). Also prominent as the “Rose garden of Rajasthan”, you are never going to get enough of the serenity lying here. According to mythology, Lord Brahma dropped Lotus flower on the ground which created the lake and Lord Brahma thus decided to give the name after the flower i.e. Pushkar.

Pushkar is 416km from Delhi. It takes almost 7.5 hours to reach Pushkar from Delhi by road.

Places to see in Pushkar

PUSHKAR LAKE
According to legends LORD BRAHMA (lord of creation) dropped a Lotus flower on the ground which leads to the creation of Pushkar Lake. Hindu mythology believes in PANCH SAROVAR (five lakes), Pushkar lake is one of them and believed to be most sacred. Lot of devotees take bath in this lake to cleanse their sins, especially at the time of Kartik Poornima (Pushkar fair). This Lake is surrounded by 52 Ghats and it is believed that water around each Ghat has special medicinal properties. During certain season migratory birds visit this Lake.

BRAHMA TEMPLE
Pushkar has one of the very few existing temples dedicated to Lord Brahma which is known as “Jagatpita Brahma Mandir”. Temple is situated near the famous Pushkar lake. This divine property was built in the 14th century and is believed to be 2000 years old. It can be visited throughout the year but the temple attracts a large number of devotees in the month of November during the time of Kartik Poornima (Pushkar fair). According to legends, this temple was built by sage Vishwamitra after Brahma's yagna (Ritual) and Brahma itself chose the location of the temple. Given a refurbished touch by Adi Shankaracharya, Lord Brahma did yagna (performing rituals) here. You can take holy dip in Pushkar lake before entering. Offering prayer to Lord Brahma who is surely one of the rarest experiences should be there in your ‘to do list’ whenever you are intending to visit Rajasthan.

ROSE GARDEN
Pushkar is known as the "Rose garden of Rajasthan", because of its Rose farming. As notified, the residents of Pushkar grow various types of rose and these roses are exported all over the world. Here, you are going to see the extended acres of farm dedicated only to roses.

Just in case, you are here accompanied with a lot of time, then you can spend some of it here while experiencing the fragrance of beautiful roses. Who doesn’t want to have a view of farms filled up with innumerable roses? Thus, keeping such a preference in mind, the place is not only meant for the locals, instead it is the most perfect one for the foreigners too. People come here to click good pictures with thousands of roses. Products made from these roses can be found in Pushkar market and also, surprisingly this city is not only spiritual but also gives an essence of romance.

MAN MAHAL PALACE
Man Mahal palace is another attraction of Pushkar. This beautiful palace was built for Amber's Raja Man Singh, who used to visit Pushkar for experiencing a retreat. Palace is built with the beautiful Traditional Rajasthani architecture with a little touch of the impressive Mughal architecture.

The Palace is situated close to the famous and crystal clear Pushkar Lake giving you a breathtaking view of the lake. It has a temple inside it and maintained by Rajasthan tourism corporation development. Palace is now used as tourists’ bungalow where they can experience Rajasthani style while indulged in experiencing the beautiful view of sunset. Palace is known as “Sarovar Hotel” providing world class stay to its visitors. Tourists can spot the reflection of Man Mahal Palace in Pushkar Lake, photographers use this opportunity to click some breathtaking photos. The fun not only ends here, it is because the tourists can also enjoy the breathtaking camel ride on special request basis.

PUSHKAR BAZAR
While you are in Pushkar don’t forget to visit the Pushkar bazar, where you will get the essence of Rajasthani products at a reasonable price. As Pushkar is known as the “Rose garden of Rajasthan”, this bazar offers you pulp of rose, Gulkand (a type of Indian dessert made by rose petals).

Not only Rose but you can spot a variety of Rajasthani architecture, Rajasthani handloom. Don’t forget to buy colorful stole to have some traditional Rajasthani look. There are large number of products with high demand from international visitors. This bazaar is not only serving you with handicrafts, Handlooms and rose products but also it has innumerable cuisines to fill up your tummy with various type mouthwatering Indian delicacies. Most of the products sold here are religious since Pushkar itself is a holy city. Market is always busy and hustling as any other Indian market.

SAVITRI TEMPLE
Situated on the top of the hill, the Savitri Temple is dedicated to goddess Savitri who is renowned as the wife of Lord Brahma. The temple was built in 1687with a mythological story connected with it. As the story goes, it is entailed that as Lord Brahma got married to another woman for performing yagna, goddess Savitri got angry and she took a revenge from Lord Brahma on noting the same. After such a revolt, she ultimately rested at this place. Therefore this place is dedicated to her. You have to hike for almost an hour to visit the temple as the route passes amidst the mighty hills. Also, the travelers can have a breathtaking view of Pushkar city as well as the beautiful Pushkar Lake. This temple is not only famous between locals but the place is famous all around the country and foreigners who visit Rajasthan.

NOTE : Ajmer is a place, 20km away from Pushkar. Ajmer is famous for its artificial lake ANA SAGAR and AJMER SHARIF DARGAH. One day excursion to Ajmer can be in your list.

How to Reach Pushkar


By Rail : Nearest Railhead is Ajmer.


By Bus : Pushkar is on NH89, 11KM of NH8, Which connects Delhi to Mumbai via Jaipur, Ajmer and Ahmedabad.

There are approximately 22,000 people living in Pushkar.

As noted, the climate of Pushkar is not at all same as the other regions in Rajasthan. This means, the summers here are not too hot and also, the winters are highly moderate here. Mentioning about the monsoons, the rain showers here are abundant and not at all scarce unlike other Rajasthan’s regions.

There is a facility of local transportation present in Pushkar. However, due to the places being located at a closer proximity, you can experience the sightseeing here majorly on foot. However, if you want you can also commute via Auto rickshaws, bike and jeep.


Where to stay in Pushkar

Pushkar offers you with all types of accommodation from budgetary hotels to luxury hotels. Thus, you can expect a variety of hotels whether the standard ones or the luxurious ones in Pushkar.