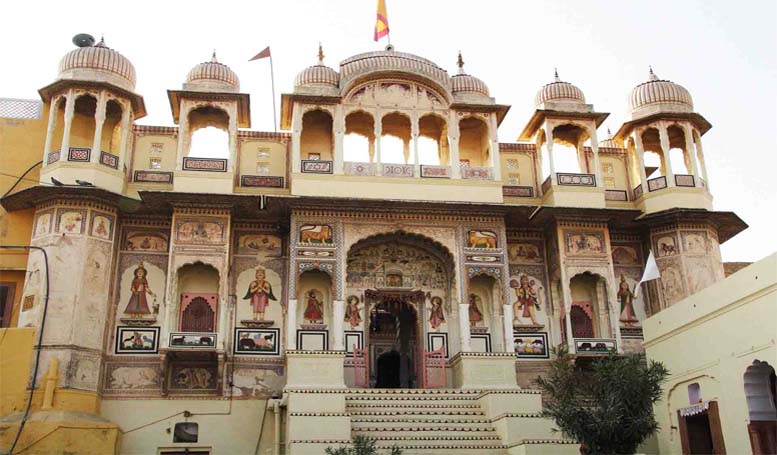 Shekhawati is a region in the Thar Desert, the northern part of Rajasthan. This region is famous for its havelis which comprise of Sikar, Jhunjhunu, and Churu. Shekhawati gives a colourful display of Rajasthani culture. As the history entails, Marwari merchant constructed these grand and beautiful havelis.
One will be awestruck by such huge havelis (mansions) which are a home of beautiful art, architecture as well as the commendable fresco paintings. Shekhawati is also known as "Open Art Gallery" and it is because, the showcase of architecture can be witnessed in the havelis which are present out in the open. Those who want to experience the rich heritage of India, Shekhawati can be the best place. Shekhawati is not only home of haveli but it is home of step wells, chhatris and forts build by Shekhawati Rajput rulers and Marwar community. It is undoubtedly a paradise for art and architecture lovers.

The distance between Delhi and Shekhawati is around 296 kms and the travel time to cover the same is approximately 6 hours.

Places to see in Shekhawati

NAWALGARH
Nawalgarh was a prosperous town in the Shekhawati region. Thakur Nawal Singh was the founder of this city, and from here itself, the city has derived its name. Thakur Nawal Singh is considered to be the son of Shardul Singh (most successful ruler of Shekhawati). There are a lot of havelis in Nawalgarh with some of them being the Aath Haveli, Murarka Haveli, Khedwal Bhawan, Bhagton ki Haveli, and Anandi Lal Poddar Haveli and these are renowned as the top visited places of Nawalgarh. Attractive frescoes and mural paintings are breath-taking and actually showcase the talent of workmen who created it. Apart from this Ganga Mai is one famous attraction of Nawalgarh. This temple is dedicated to goddess Ganga. Beautifully carved structure and the astonishing interior are worth visiting. Upper dome (mandapa) is filled with a lot of beautiful paintings.

SETHANI KA JOHARA
Showcasing the bravery and valour of the wives of warriors, the Sethani Ka Johara has always taken the tourists back to the bygone era. Sethani ka Johara is a reservoir located west to Churu, Shekhawati. All the havelis in Shekhawati region were built in 18th century and early 20th century. This reservoir was built in 1899 by a widow of Bhagwan das Bagla. It was the finest Johara in the area containing sufficient water in it.  This attractive Johara not only attracts humans but also a large number of birds. This peaceful place is perfect for spending your evening while you witness picturesque sunset. One can actually spot the reflection of architecture in the water.

TAL CHHAPAR SANCTUARY
Located in the Churu district of Rajasthan and 250km from Jaipur, Rajasthan "Tal Chappar sanctuary" is one of the most popular tourist attractions of Shekhawati region. It is known for the exquisite birds such as the Blackbug and other variety of birds. The name of this Sanctuary was given after the name of Chhapar village. The whole sanctuary is covered with open grassland and scattered Acacia and Prosopis trees.

KHETRI MAHAL
Known as wind palace of Jhunjhunu, Khetri Mahal is proudly situated in the Khetri. Surprisingly this Mahal has no windows still it is known as a wind palace. You can actually have a soothing feeling while exploring this Mahal because of the wind flow. Most of the rooms are connected through arched portals. This Mahal was built in the year 1770. The terrace gives an absolutely breathtaking view of all the buildings of that region. It was famous for its paintings and murals, now fragments of these paintings are kept in private chamber of Thakurs. Structure of the Khetri Mahal is unique than any other building of that region. One can spot the gigantic Badalgarh Fort from Khetri Mahal which was constructed in the early 16th century. A large portion of the Mahal is covered with pinkish plaster.

MANDAWA
Mandawa is a beautiful town of Shekhawati region. It is situated 190km off to Jaipur which is capital of Rajasthan. This town is filled with fort and Havelis. It once functioned as a trade hotspot for the goods from China and the Middle East. There are references regarding the founder of Mandawa and Mandu Jat. This place was known as ‘Mandu ki Dhani’, ‘Mandu ka Bas’ or ‘Manduwas’ which changed to ‘Manduwa’, ‘Mandwa’ and finally to ‘Mandawa’.

Thakur Nawal Singh was the ruler of Nawalgarh as well as Mandawa and magnificent Mandawa fort was built by him in the middle of the town. This fort is presently serving as a heritage hotel. One can experience the era of Lord Krishna after entering in the fort as its gateway is adorned with paintings of Lord Krishna and his cows.

DUNDLOD
Dundlod is the town in Jhunjhunu district of Rajasthan. The town can be reached by road from Delhi, Bikaner and Jaipur. Dundlod is famous for its forts and havelis, which are decorated by richly fresco paintings. Dundlod fort is the massive Rajputana fort built by Keshari Singh in the year 1750 and later major additions were added by Sheo Singh in the 19th century. Beautiful Chhatri of Ram Dutt Goenka is also one of the major tourist attractions here which was built in the year 1888, the dome of chhatri has beautifully carved floral motifs. War panorama of Mahabharata is described in the paintings of inner base. Apart from the Chhatri, there is Satyanarayan Temple built by the Goenka Family. Dundlod fort can also be called as the most perfect mixture of Rajput as well as Mughal art. The Diwan-e-Khas (Hall of private audience) is decorated with fine antiques and an impressive library, the Zenana quarters are on the 1st floor, featuring furniture and exquisite décor.


How to Reach Shekhawati


By Rail : The Shekhawati region is served by several stations


By Bus : Shekhawati lies within the angle formed by NH8 and NH11, which connect Delhi to Jaipur and Jaipur to Bikaner respectively.

In order to explore the varied cities incorporated in the Shekhawati region, the travellers have an option of commuting in auto rickshaws. They can also travel here in their own vehicle or else, they can hire a chauffeur driven vehicle from the rental companies present in the varied cities of Shekhawati.


Where to stay in Shekhawati

Shekhawati is a region where the travellers are free to enjoy the accommodation as per their budget and expectations. Bringing for them, a wide range of hospitality services, they are surely not at all going to get dissatisfied with the hotels here. Not only the hotels, but you can also experience staying in decent guesthouses and the luxurious 5 stars rated Heritage Havelis giving you a stay like a king.