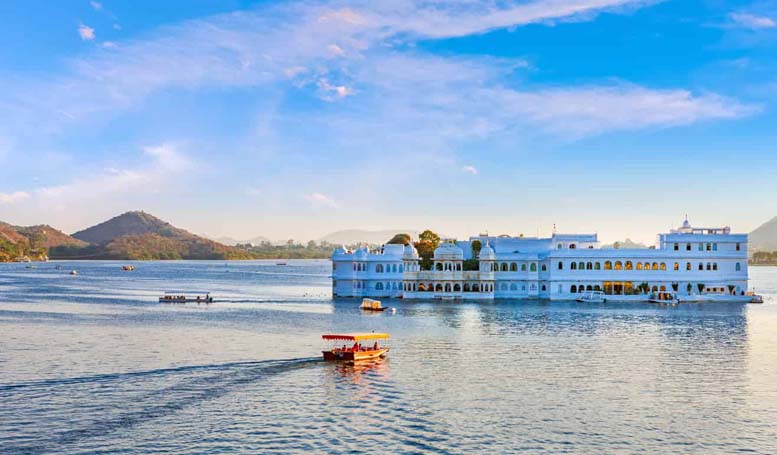 Udaipur is an apt destination for experiencing a lovely atmosphere filled up with the utmost vibrancy, positive charm and happiness all around. The ‘Venice of the East’ and obviously, the ‘City of Lakes’, the beauty of Udaipur is marvellous. Its setting is purely unmatched with any other region not only in Rajasthan but all across India. Its gigantic forts, architectural luxurious Havelis, narrow streets and the colourful culture are surely a delight for every traveller roaming here. Udaipur is not just a destination; it is an experience! Unfolding the exquisite traditions and the engrossing tales from the past, the city is literally a heartthrob. Exploring the city on a horseback, wheels or a boat ride on the pristine lakes here is one of the most enjoyable facets while touring here.

The distance between Delhi and Udaipur is around 663 kms and the time taken to travel from Delhi to Udaipur or vice versa would be around 11.5 hours.

Places to see in Udaipur

City Palace
The City Palace is quite renowned for its historical approach, architectural representation and the beauty that should definitely be captured in the cameras! The site is opened for public on all days. Maharana Udai Mirza Singh established the City Palace during the year 1559.

This splendid beauty is located right on the banks of Lake Pichola and from this you can easily figure out the amazing view of Lake Pichola that the City Palace grants to its visitors. Its awe-inspiring size, exhibition of the fusion of Chinese, European and Medieval architecture and the hanging gardens- everything is magnificent here! The walls of this palace support the exclusive paintings and some intricate craft done on them definitely giving a heart stealing look to the interiors of this huge setup! While being here, you can enjoy the engaging City Palace Museum and also the peaceful environment while gazing at the crystal-clear Lake Pichola.

Vintage Car Museum
If you have never been to the Vintage Car Museum even after travelling to Udaipur, then your trip hasn’t completed yet! The motor enthusiast or we can say the automobile lovers are most welcome here. Every traveller is wholeheartedly welcomed here but the best enjoyment is definitely gained by those who are a dire lover of cars.

Inaugurated with full support and interest on Feb 2000, this museum is favoured all across the world since that year! Well, as the name suggests- Vintage Car Museum is not at all a common museum showing cars instead it has a wide variety of vintage cars such as the 1934 Rolls Royce and other rare models of the same. Sound interesting, right? It is more engrossing than you are even imagining. An added advantage of being here is the feeling of serenity due to the quite environment is surely a treat for mind!

Lake Pichola
Udaipur is a City of Lakes because of a good number of extended lakes existing here and talking about the most famous out of these, it would be none other than Lake Pichola. It is almost impossible to miss out this site while being in a tour to Udaipur since it is always there in every traveller’s bucketlist.

This man-made wonder was formed in the year 1362 AD by the eminent Rana Udai Singh II and later this water body was extended during 16th century. It is bounded by the magnificent hills, grass, forests, green vegetation and also the beautiful gigantic palaces on all sides and they surely add on to the beauty of this lake. There are a good number of activities in which the travellers can indulge during their presence there and the most significant one out of them is ‘cruising’. Cruising on Lake Pichola lets you have a lot of views of the town and the lighted city!

Jagdish Temple
This spiritual hub is going to fill up your senses with utmost divinity! Being here is an experience filled up purity, peace of mind and abundant positive aura. Not only a place for the spiritual seekers, Jagdish temple is also a place for the photographers, architect lovers and the history buffs.

Jagdish Temple was given an identity in 1651 and is presently considered to be the biggest temple in Udaipur. Accompanied with an antique Indo- Aryan architectural mixture, this divine hub has already experienced a spending of Rs. 1.5 million on its construction. It has been created with an intention of paying homage and seek blessings of Lord Vishnu, however there are also the statues of other gods and goddesses present here. Some of them are Sun God, Lord Shiva, Ganesha and goddess Shakti. It is not mandatory that visiting this temple should solely be done for spiritual purposes, the travellers can also enjoy the stunning carving, elephant sculptures and other relatable architectural pieces there.

Saheliyon-ki- Bari
A major tourist attraction in Udaipur, The Saheliyon-ki-Bari is a heart stealing garden consisting of the fountains, arts made by marble and also the lush green lawns. As the name goes, Saheliyon Ki Bari meaning ‘Garden of Maids’, this garden was gifted by Maharana Sangram Singh for his wife and her maids during the 18th century.

The designing of this garden was done by the king himself. Its ravishing architecture, elephants carved out of marbles, flowerbeds, as well as the romantic surroundings here are truly a masterpiece. Within the vicinity of this garden is a museum that showcases an array of royal households are truly engrossing along with the pictures and paintings from the bygone era. Also, this trip is going to be an adventurous one for you since you will be spotting some stuffed cobras along with some other animals here! It is actually a place that must be visited no matter what so that you can see the best out of what all Udaipur has to offer.

How to Reach Udaipur


By Rail : Udaipur Station has speedier connections with Delhi with the recently launched Mewar Express from Nizamuddin Station.


By Bus : Udaipur is on NH8 which links Delhi to Mumbai via Jaipur and Ahmedabad.

There are around 450,000 people living in Udaipur.

The three main seasons in Udaipur are summers, winters and monsoons and the city majorly experiences a tropical climate all throughout the year. Also, it has a moderate climate and this makes it a truly unique region of Rajasthan. The winters here are pleasant as well as comfortable, however summers are quite hot due to the presence of scorching heat. Temperature during summertime ranges between 30-40 degrees Celsius and the temperature in wintertime are recorded between 11-30 degrees Celsius.

Bus services in Udaipur are quite easily available and also, they charge a reasonable amount. Thus, it is commonly used by the locals as well as the tourists there.

For getting in and around Udaipur, travellers can also have an access of the auto-rickshaws to commute from one place to another. Apart from that, you can travel via private cabs provided by Rajasthan Cabs and Savaari.

The travellers can take a vehicle on rent for roaming and exploring the hidden gems within the splendid city of Udaipur.

Where to stay in Udaipur

Being a ‘city of lakes’, Udaipur has always been known for its Lake side hotels from where the travellers can have a picturesque view of the beautiful lakes situated nearby. Also, staying in Udaipur’s guest houses is quite a common thing for the travellers. In order to provide the comfortable stays, Udaipur is a home to a good number of accommodation options.
Apart from that, there are many small families which are running guest houses in Udaipur at a quite reasonable cost which would be mostly suited for the budgeted travellers. Not forgetting about the royal heritage havelis here, the luxurious stays in Udaipur are incomparable and their royalty is going to make a traveller’s vacation more than perfect.