Get on board the Royal Rajasthan on Wheels, one of the most popular luxury trains in India, at Delhi. Reach Jodhput to visit such attractions like the Mehrangarh Fort, Moti Mahal and Sheesh Mahal among others. The next halt is Udaipur, which is quite well-known as the 'City of Lakes'. After a sightseeing tour of the city, travel to Sawai Madhopur for a fun-filled wildlife safari into the Ranthambore National Park. Move on to Jaipur, the 'Pink City' of India. Here, enjoy visiting the City Palace, Hawa Mahal and Jantar Mantar. Proceed to Khajuraho to witness the Khajuraho Temples, a UNESCO World Heritage Site. At Varanasi, experience the Hindu culture, customs and traditions while making visits to multiple Ganga ghats. Reach Agra to immerse yourself into the heart-stirring beauty of the Taj Mahal. Travel back to Delhi. Add to it all the royal treatment that you'll receive in the luxury train.

The journey of a lifetime on Royal Rajasthan on Wheels rolls on from Safdarjang Railway Station every Sunday. A warm traditional welcome with cultural music & marigold garlands is being given to passengers. And after that they are escorted to respective saloons by immaculately dressed captains in churidars, sherwanis and long tailed pagdis (turbans). Enjoy the first evening on train to acclimatize yourself in the surroundings that you shall be in for next seven days.

This morning the Royal Rajasthan on Wheels reaches Jodhpur the second largest city of Rajasthan. Founded by Rao Jodha in 1459A.D. its main highlight is Mehrangarh Fort. Visit the grand palaces within it that showcases examples of fine architecture - Moti Mahal, Sheesh Mahal, Sileh Khana, Phool Mahal and Daulat Khana. After the fort sightseeing visit Jaswant Thada laying nearby fort it is a group of royal cenotaphs made of white marble. Later in the afternoon have delicious lunch at Palace hotel and return on the Royal Rajasthan on Wheels as it rolls towards Udaipur.

Morning you reach Udaipur the city with its lakes and palaces enchant many visitors. Founded by Maharana Udai Singh of Mewar in 1559 A.D. Udaipur sightseeing take through some of the most beautiful marble palaces such as Jag Niwas (Lake Palace) and Jag Mandir which raise from the serene Lake Pichola the landmark of the city. Enjoy a visit to the royal city palace museum, after the ride through lake Pichola. Lunch will be served at the restaurant of luxury hotel in Udaipur. Later return back to our luxury train, and proceed for the next visit Chittaurgarh passing through the colourful countryside. (Arrival 16.45 hrs / Departure 20.00 hrs). The main attraction here is the fort complex which is an impressive structure with massive walls, arched gateways, deserted palaces, peaceful temples and the exquisite Jaya Stambha, Tower of victory. Moving from here we return back to Royal Rajasthan on Wheels and depart to Sawai Madhopur.

Early morning the passengers reach Sawai Madhopur, the city is named after its founder Maharaja Sawai Madho Singh I. After breakfast, we drive under the Ranthambhore Fort and past the lakes in jeep is stimulating. Enjoy wildlife at the Ranthambhore National Park which is one of the most famous wildlife parks of the country specially known for its Tigers. There are around 300 species of birds found here along with the inhabitants such as Striped Hyenas, Sambar deer, Caracals, Sloth bears, Black bucks and Indian Flying Foxes etc. After enjoying the wildlife safari, we will depart to Jaipur (Arrival 11.30 hrs / Departure 22.15 hrs.) Jaipur is also known as the Pink City. Jaipur is the capital of royal Rajasthan founded by Maharaja Sawai Jai Singh II in 1727 A.D. A guided tour to explore the city begins in an air conditioned coach. During the sightseeing they take you through Hawa Mahal a pyramid shaped monument with 953 small windows. Followed by the visits to Amber Fort which is a stunning hilltop fort. Later after lunch visit City Palace and Jantar Mantar, spend some time at the colourful bazaars of Jaipur, famous for its block printed cloths, precious and semi precious stone. By evening move back to the hotel on wheels for evening tea / coffee and snacks. Get ready to enjoy the cultural evening at the luxurious city hotel followed by the Indian dinner. Later move towards our next destination Khajuraho

Morning we reach to the land of temples Khajuraho dating back to 09th century. After breakfast on board, proceed for the visit to superb temples setting an example of Indo Aryan architecture. The temples are a World Heritage Site that is carved in an eye catching artistic stonework showcasing the life of gods, goddess, musicians and mythological animals. These temples are the finest carved temples in India with the exterior depicting erotic Kama Sutra poses. Till date 22 temples survive of the 85 originally built. Afternoon enjoy the lunch onboard, and proceed for the further sightseeing of Khajuraho southern group of temples, with the rich culture and heritage. Evening get back to train for evening tea / coffee and bit relax. Evening enjoy the sound and light show at western group of temples, representing the story of the unique temples from the 10th Century. Later board the train and depart for the Varanasi

Welcome to the oldest city of the World continually inhabited. It is one of the most colourful, chaotic and unapologetically indiscreet places on the earth. This holy city is a place where people come on the Ghats of the Ganges to wash away their sins in the sacred water and also considered to be an auspicious place to die as per Hindu religion. Start the tour with early morning boat ride on the river Ganges. It is the best way to come close to this holy and spiritual city as you float on the river Ganges witnessing the early morning rituals on the Ghats. The sound of conches & temple bells add to the delicate pink fabric of dawn. The formerly hushed murmuring of ancient Sanskrit Shlokas (hymns) now rises, in one voice, to a crescendo of unparalleled piety & joy. Later we explore the city by foot to get the feel of this oldest living city of the world visiting famous Vishwanath Temple, Bharat Mata Temple and various other situated here. Board the train for lunch, and later in the evening attend the aarti at the ghats of the Varanasi. Dinner aboard the luxury on wheels.

Reach early morning at the Agra, enjoy breakfast on board and proceed to attractions include, Itmad-Ud-Daulah nicknamed as Baby Taj and the colorful bazaars (markets) of Agra. Proceed on board for lunch, later after relaxation, visit the monument that draws largest number of tourists to India is in this very city - Taj Mahal symbol of eternal love standing on the banks of River Yamuna is considered to be the most beautiful building of the world. Built by Shah Jahan as a memory for his second wife Mumtaz Mahal who died giving the birth to their child. It took almost 22 years and 20000 artisans and laborers to build this wonder of the world. In Agra there are many attractive monuments one can see and we take you the next tourist site Agra Fort built on the bank of the Yamuna River this massive red sandstone fort is one of the finest forts in India but somehow overshadowed by the glory of Taj Mahal. Evening followed by the Sound and light show at Kalakriti. Overnight aboard the luxury on wheels and proceed to our last stop Delhi.

Reach early morning at Safdarjung railway station, enjoy the lavish breakfast on board and get disembark at the station with the royal treat and lifetime experience. 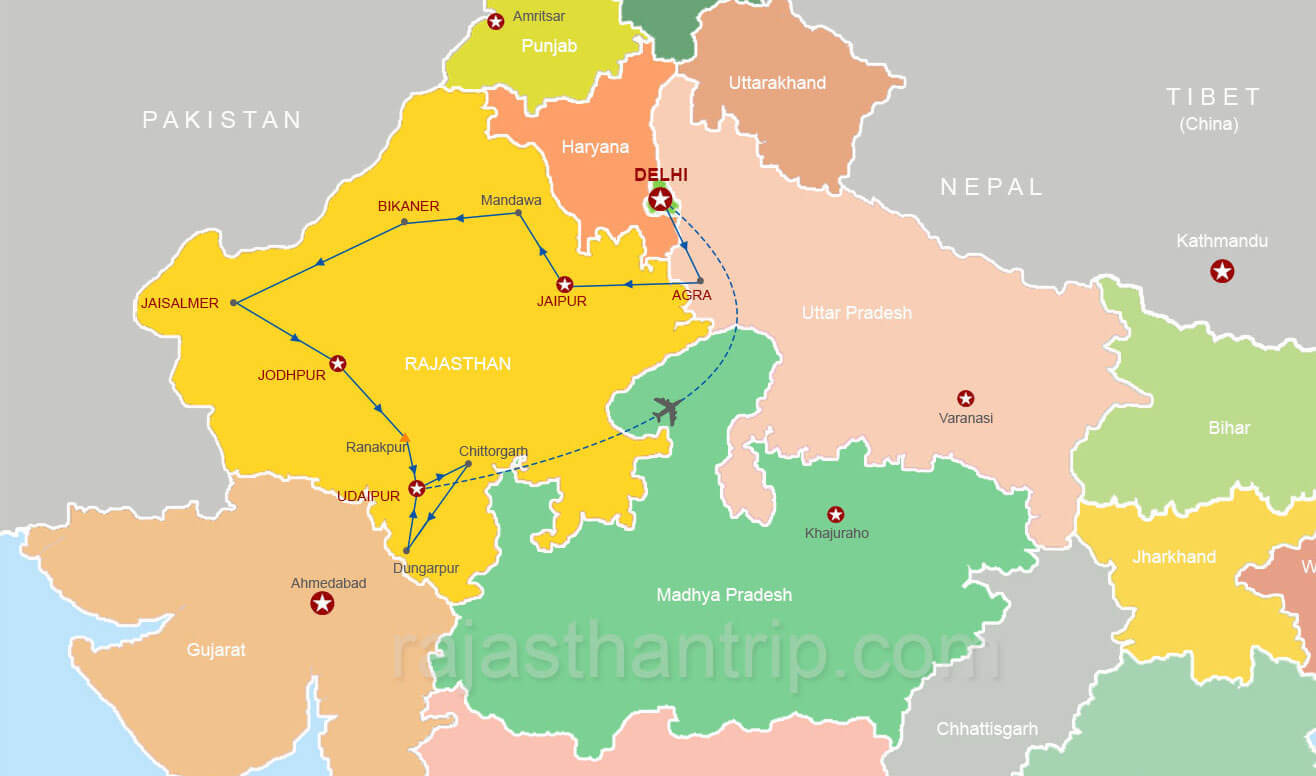 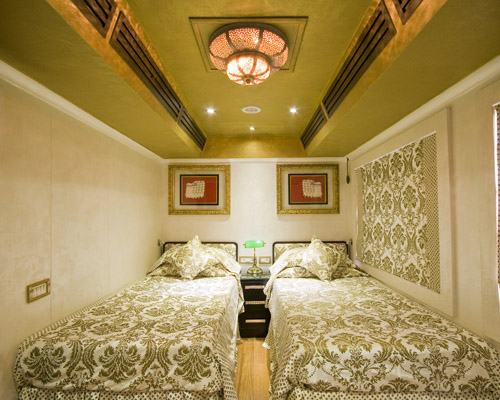 The Palace on Wheels 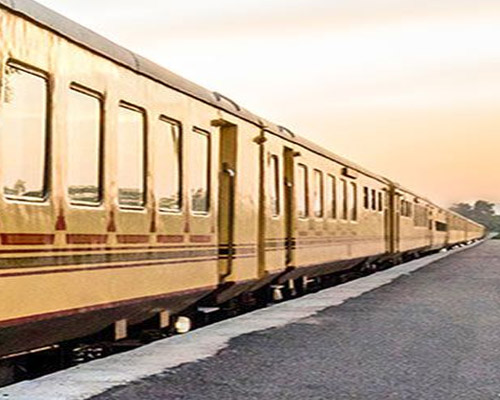 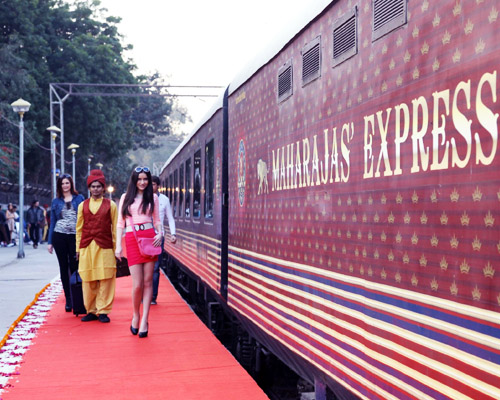 Maharajas Express The Heritage of India 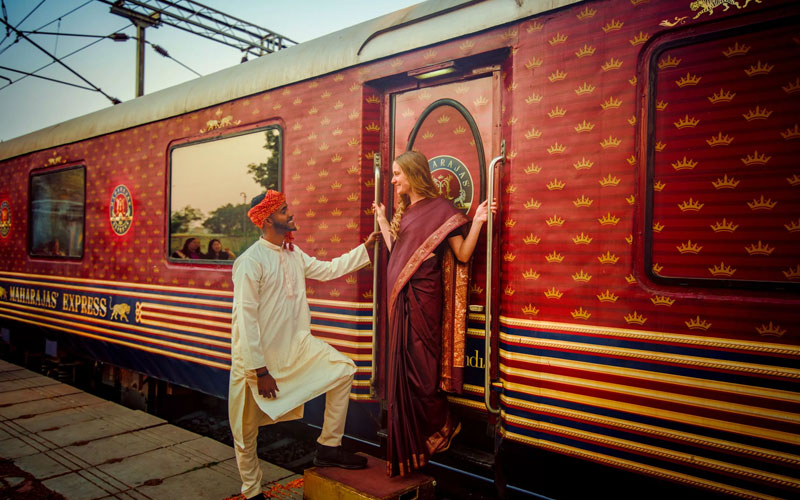