East of the Pakistani border is the city of Bikaner in the Indian state of Rajasthan. The Thar Desert envelops it completely. The Junagarh Fort, a vast complex of opulent structures and rooms, which dates back to the 16th century, is what makes the city famous. Bikaner is a paradise for travellers and a cultural haven. This city will enslave you in its forts, enchant you with its natural beauty, and wow you with its illustrious past. The city of Bikaner will beckon you back time and time again with all of its intriguing sites to visit.

There are a variety of tourist places to visit in Bikaner that will fascinate history and culture fans and is easily accessible by air, rail, and road. Here are some guidelines to assist you to plan your vacation to Bikaner before we discuss the main tourist attractions in the city.

There is never a moment of weakness to learn about Bikaner's ethnic culture and history. However, the winter season is the greatest time to visit Bikaner because of the lovely weather from October to March. Then there is the annual Camel Festival in January, which draws more tourists at this time of year.

Here are a few must-see places to visit in Bikaner that will offer you an appreciation of the splendour of the city's kingdoms and their superior architectural design. If you want to go deeply into the history of this stunning location, here is a list of the greatest Bikaner attractions. 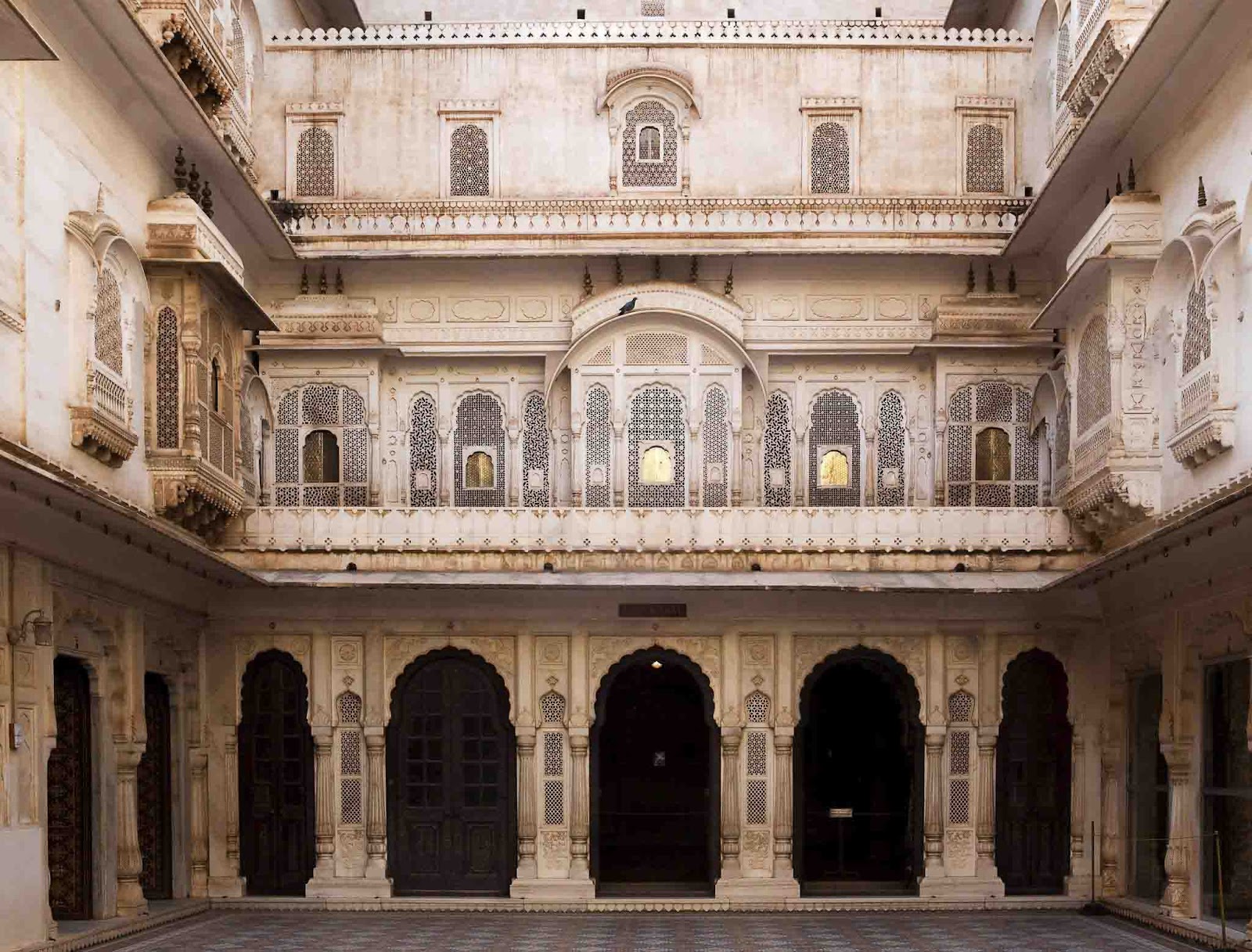 The city of Bikaner was constructed around the imposing Bikaner Junagarh Fort. The unbeaten and unconquered Junagarh fort, which still stands tall and narrates tales of a great past, is one of the most fascinating places to view in Bikaner. This fort is a rare example of its sort thanks to the inventive fusion of Gujarati and Mughal architecture. Photographers have several choices to capture it because of its towering majesty and lovely surroundings.

The fort's interior palaces, gardens, balconies, kiosks, and other structures show a fusion of architectural styles influenced by the varied kings' cultural backgrounds and outside influences. 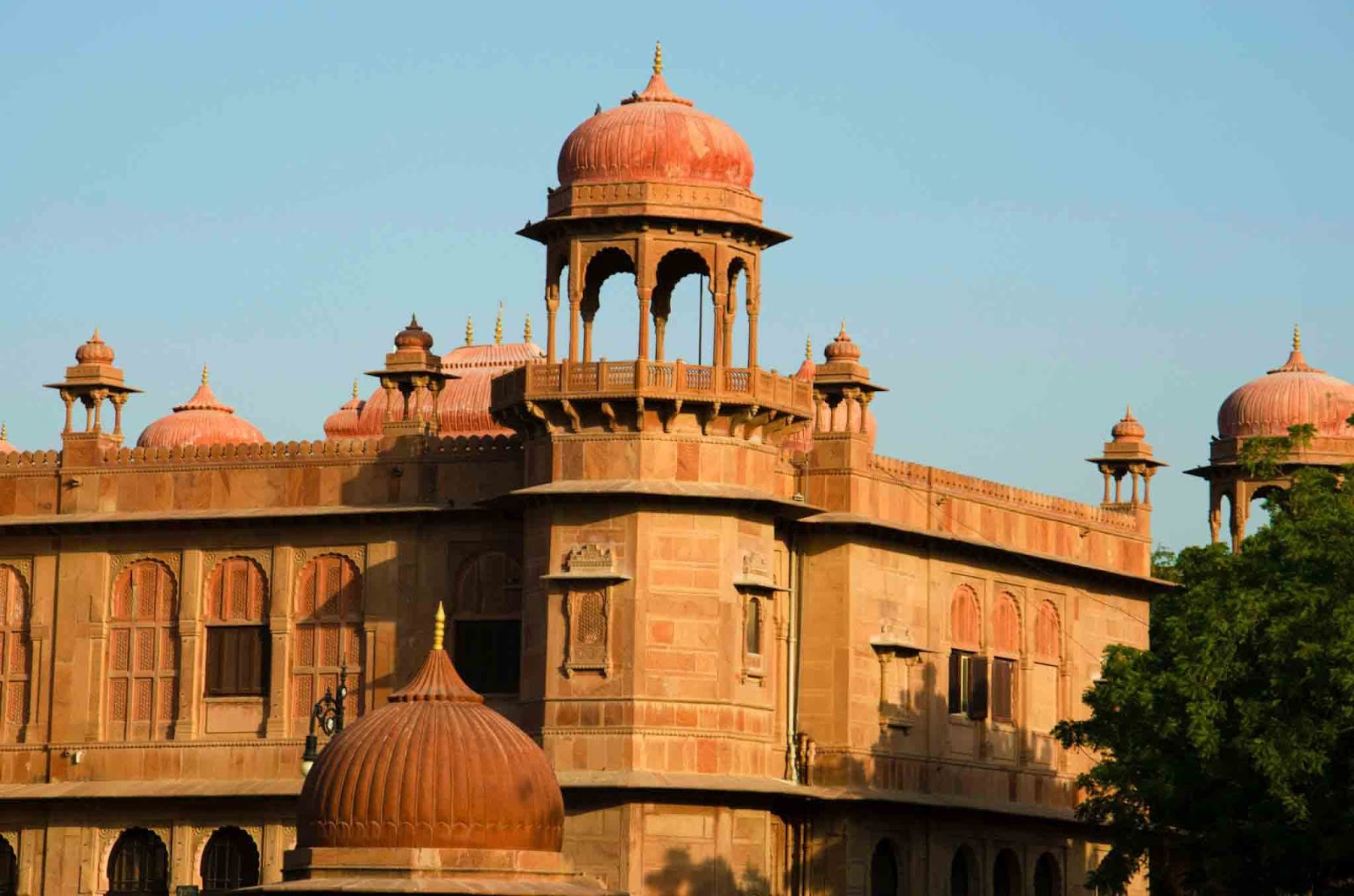 The former Maharaja of Bikaner created the architectural masterpiece known as Lalgarh Palace. Both historically and materially, it is a magnificent display of wealth. The palace has ornate wings with expansive hallways, and each one is decorated with paintings and other spectacular artefacts that bring the history of the area to life. The palace is a wonderful place to learn about and develop a passion for history, royalty, and architecture. A stay at the vintage hotel will actually allow you to feel this palace's splendour more closely. This opulent hotel has been built inside a section of the palace, where you will be treated like royalty while surrounded by opulent decor. Enjoy the historical splendour of this opulent palace and the historical beauty of India. 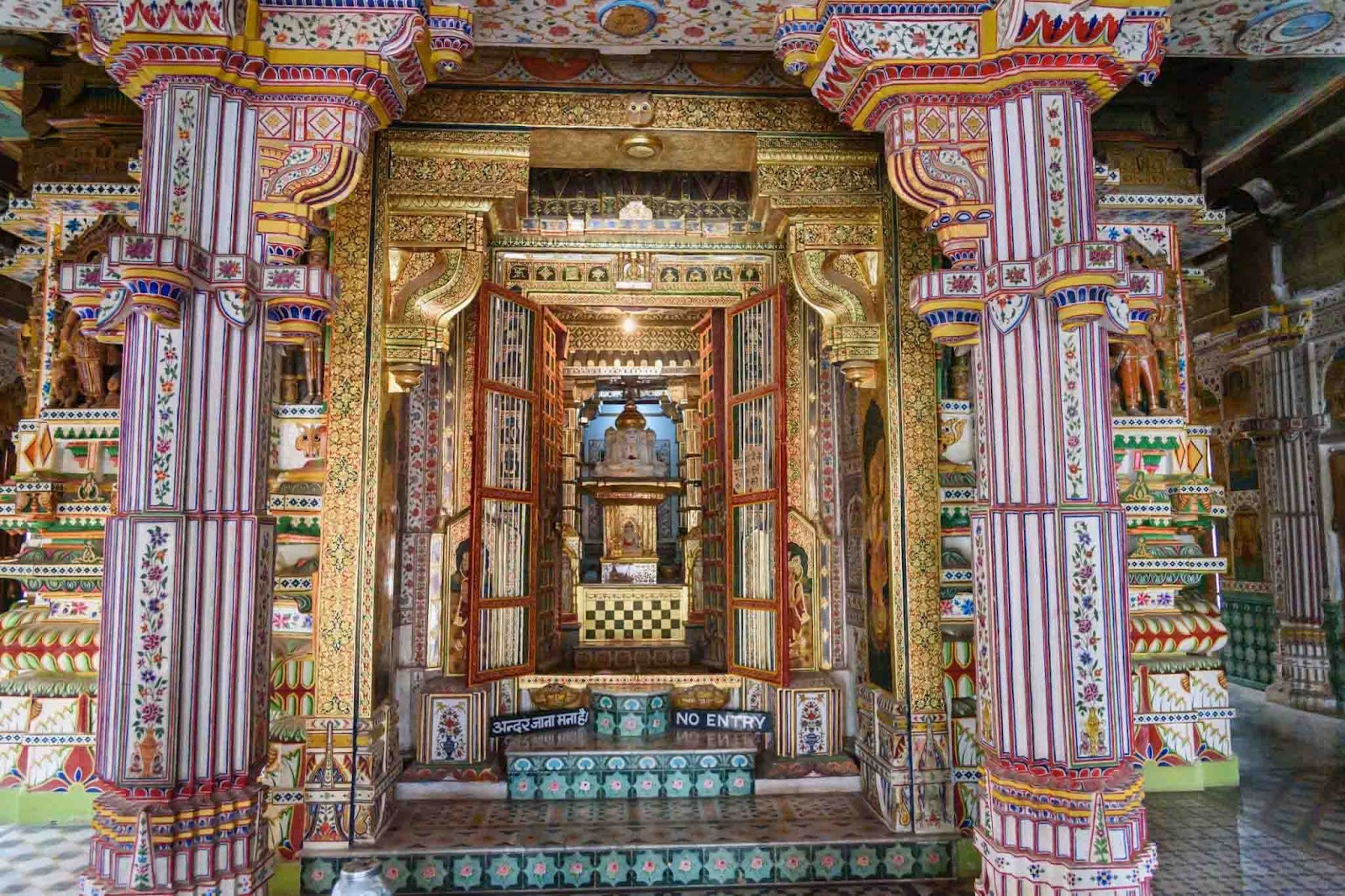 The Sumatinath Jain Temple in Bhandasar is devoted to this religion's fifth Tirthankara. You will be in awe of this temple's beauty because of its distinctive Rajputana architecture and complex design. It is one of the religious tourist places to visit in Bikaner because of the combination of red sandstone and white marble, as well as the alluring gold layer finishing. This three-story temple's magnificence is admirable, and every traveller should include it on their itinerary. 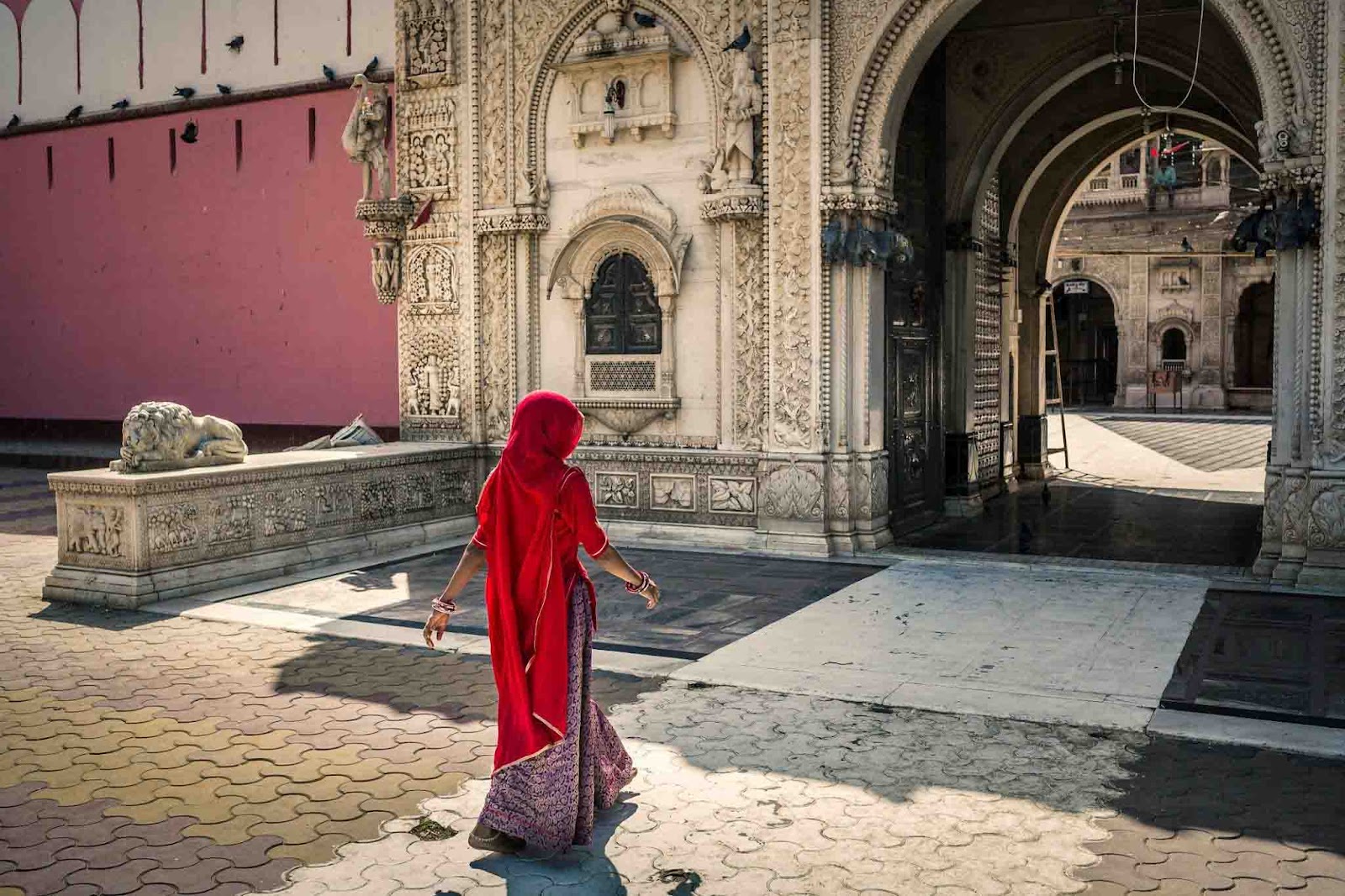 The Karni Mata Temple, one of Bikaner's unusual tourist attractions, is devoted to Karni Mata, a manifestation of the goddess Durga. The shrine is thought to be home to more than 20,000 rats. As they are thought to be the sons of Karni Mata, the visitors worship these rats and give them prasad. The temple's beautiful marble sculptures and silver gate contribute to its allure. 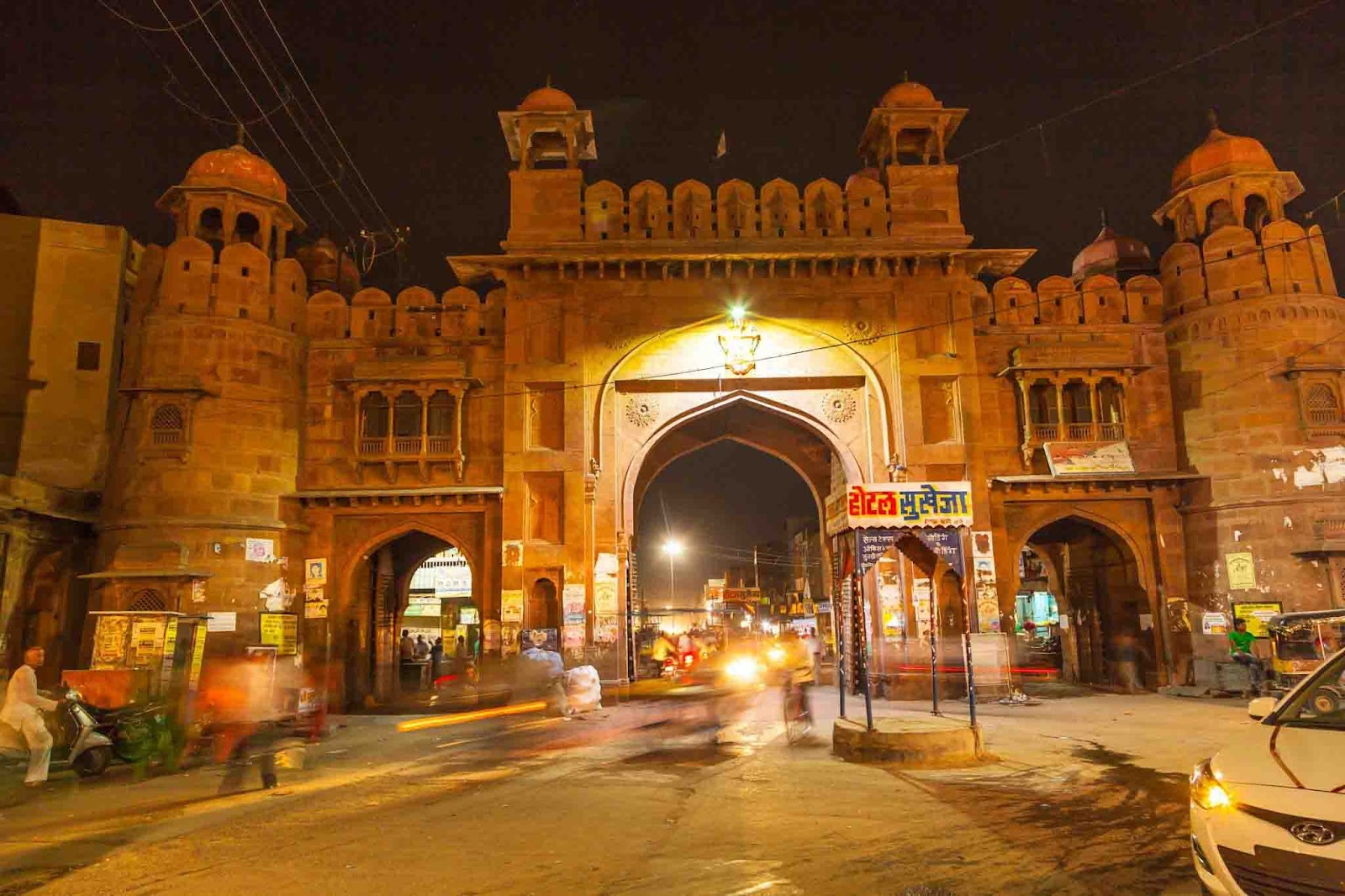 The Kote Gate, which separates the modern city of Bikaner from the old city, stands tall like a guardian to the city and serves as its primary entrance. Local shopping is a Bikaner attraction. This market offers a wide range of products, including handicrafts, traditional attire, kitchenware, art made of camel hide, and traditional open-toed shoes. This location will thrill you with its abundance of dining options in addition to its shopping. Additionally, this location is surrounded by some of Bikaner's top shopping areas. 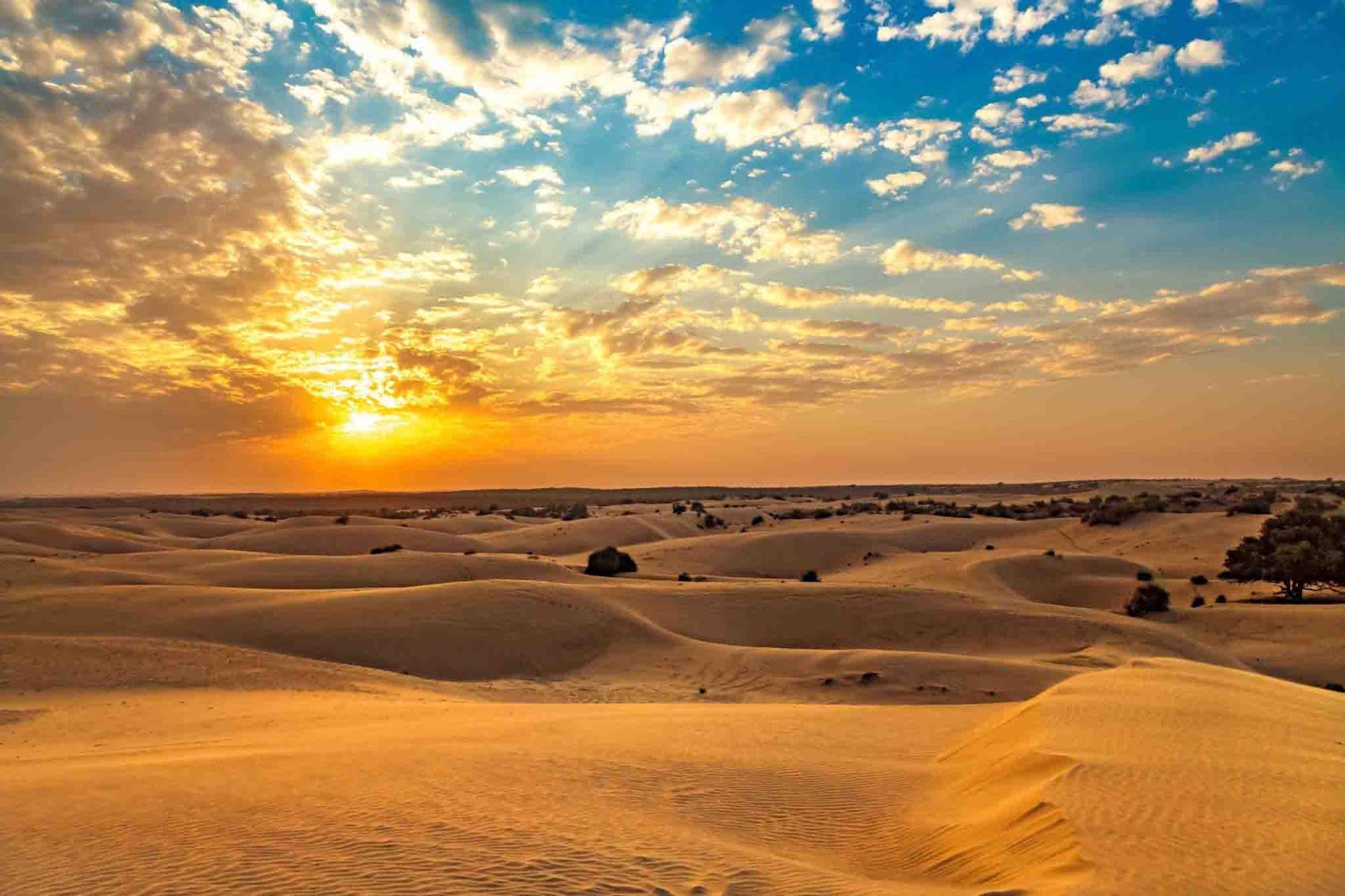 At the Thar Desert, explore the wilderness in the centre of the desert and take in the breathtaking splendour of the sand ocean. Every visitor to Bikaner should go on a camel safari. You can experience nature in its most basic form while taking advantage of the excellent facilities offered by the organisers.

The Sursagar, sometimes called Chand Talao, was constructed in the 18th century. It designates the city's centre and one of the pretty sights in Bikaner, which is encircled by the bustle of the Old City. On Maha Shivratri, a large monument of Lord Shiva that is illuminated serves as a veritable beacon over the lake. A number of gates at the base of the perennial lake are opened in the event of an overflood. The Vishvamitra River is then filled with water.

The Kapil Muni Fair, which is referred to as the biggest fair in the city, is what makes Kolayat famous. Kolayat is a lovely and charming tiny town. One of the top offbeat places to visit in Bikaner is known for the holy water of the Kolayat lake and the celestial Kolayat Temple. Quite a popular pilgrimage, the tradition of this location claims that Kapil Muni stopped here and meditated when he was travelling to bring peace and harmony.

One of the best shopping areas in Bikaner is Station Road. There are several stores and street vendors all around the place. Cheap rates might be found on embroidered clothing, commonly known as jootis, leather products, and traditional artefacts. Additionally, you can browse the region's leather crafts and small paintings. This is a popular attraction in Bikaner that is close to the train station.

This fort comes under the heritage places in Bikaner and is called Bikaji ki Tekri. This historic location is barely 3 kilometres from the heart of Bikaner, and driving there will only take 10 to 14 minutes. It can be found next to the former palace, just outside the city. Bikaji Ki Tekri, the first fort in the city of Bikaner, is one of the most popular tourist destinations in Bikaner. The oldest building in Bikaner, built by Rao Bika, is thought to be about 500 years old. A significant portion of the fort's architecture is made of red sandstone or Dulmera stone, which is particularly intriguing. If you go down to the basement, you'll uncover a maze of chambers connected with puzzle pieces.

One of the oldest temples in Bikaner is the well-known Shri Laxminath temple, which houses the sanctuaries of Goddess Laxmi and Lord Vishnu. The gorgeous icons of numerous gods and the elaborate silver artwork are what set this temple apart. Since Shri Laxminath temple is well-known for hosting Hindu festivities like Diwali, Janmashtami, and Ramnavmi, the holiday season is the ideal time to go.